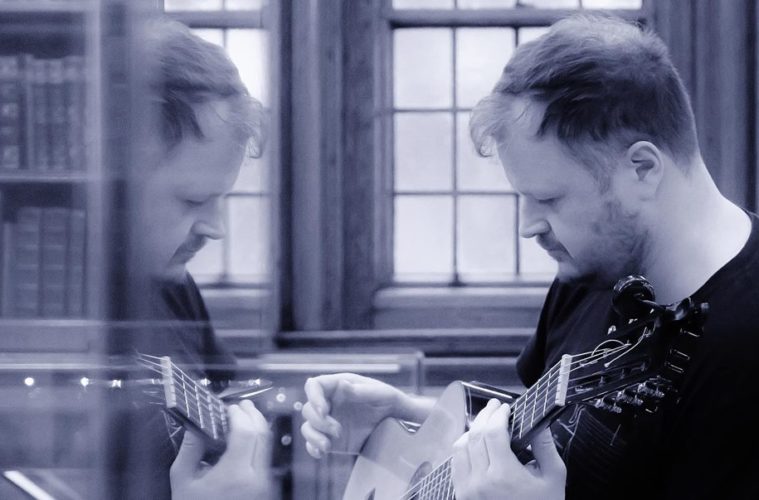 For those of you who don’t know him, its really about time you did. Neil Campbell is one serious guitarist and composer, whose many, many collaborations have included Vini Reilly, Jan Ackerman and the legendary Jon Anderson. He found time to chat to us, ahead of his forthcoming gig at 81 Renshaw Street on the 4th April 2019…

Liverpool Noise: Hi Neil! Tell us about the creative projects that you have on at the moment…

Neil Campbell: Over the last 2-3 years, I’ve been working on three albums (The Outsider – News from Nowhere, After the Flood and Last Year’s News) which are all now completed. These form what I call The Global Flood Trilogy, a series of albums about the sort of music musicians might make after surviving a disaster such as a flood or a nuclear war. My idea is that the music they would make would form a soundtrack to the building of a fairer and more culturally inclusive world; so it is more a utopian than a dystopian concept.

The final album in the trilogy, Last Year’s News, is about to be released (on 13th April) and is the most personal and reflective of the three albums.

The music of the Flood Trilogy is generally very positive and is instrumental and acoustic in nature. It combines all sorts of musical styles from around the world, encompassing African, Indian and Celtic music, along with classical music from the present and the past and a dose of progressive rock for good measure.

Over the last couple of years I have also been contributing as a performer and writer to a forthcoming album by an Irish producer and songwriter, Una Quinn. Una’s album is at a fairly advanced stage so I’m looking forward to hearing it as a complete piece of work when it is released soon.

Alongside these completed (or almost completed) projects, I have in progress another couple of recording/performance projects that will happen across the next couple of years, so I will be back in the studio shortly.

As a performer, alongside my solo concerts, I have been developing a repertoire of original music for my band After the Flood and playing it out live. This is now a five-piece band with two guitars, keys and drums and 8 string bass (always a talking point). They are all great musicians and great people and it’s a real pleasure to perform together.

NC: My focus has always been on writing music and I suppose one of the things that has driven me is my always wanting to make something that I have not quite done before. From a starting point in the late ‘90s of simply getting my solo guitar music recorded, over the last twenty years I have gotten more and more interested in the process of producing albums with multiple layers of instrumentation and production.

Like other musicians, I write music inspired by the music I listen to, and my listening is always evolving as I discover new music. I am an avid listener to all sorts of music and I can never understand it when musicians tell me they are too busy with their own music to listen to the music of others – but that seems to happen quite a lot, strangely.

Whilst my musical productions are often quite elaborate, like many other genuinely independent artists my work is usually produced on a shoe-string budget. Moving forward, one of the things I strive for is to acquire the resources and funds to realise in recording and live, some of my more extravagant ideas that, for instance, require choirs or orchestras or need lots of studio time. I would generally like to be able to have more time in my life to focus on making and playing music.

LN: You are known as a serious guitarist….who are your inspirations?

NC: I feel that I am a composer first and a guitarist second and although I have skills as a guitarist, coming from a classical guitar background, my playing approach is most suited to playing my own music – it is quite idiosyncratic. I very rarely play music by other composers. I also develop techniques as a player out of necessity of what I want to hear as a composer.

When you are a guitarist people tend to assume that the focus of your music listening and your points of inspiration are from other guitarists, but conversely most of the music I listen to has pretty much nothing to do with guitarists and guitars. I am just as likely to be listening to intelligent dance music or a minimalist opera, for instance, and taking inspiration from that.

I’m most interested in music that defies genre – music that is doing its own thing outside of the strictures of an established style, so I suppose the approach of guitarists who have forged their own styles outside of established traditions, are the ones that most inspire me.

I think a lot of very lauded guitarists operate in one stylistic area that defines them, e.g. Eric Clapton is a blues guitarist or Eddie Van Halen is a rock guitarist. As such, this adherence to genre makes those kind of musicians, in my view, fairly predictable and not so interesting, no matter how good they can play technically.

I’m inspired by guitarists like say Robert Fripp or Steve Hillage or Michael Hedges, who only sound like themselves and don’t seem to be trying to stick to other people’s blueprint of what they should be doing stylistically. They do their own thing – that’s what I want to do.

NC: Different pieces and different projects require different ways of working so there is not one approach.

At the most intuitive end of what I do I will just put my hands on the guitar, or keyboard sometimes, and improvise the start to a piece and usually something will crystallise. Then I use the first idea as the inspiration for the 2nd, 3rd or 4th ideas in the piece of music. Then through playing it over again and again and deciding what the structure will be, the piece turns into a fixed composition.

At the most intellectual end of what I do I can have an idea for a rhythmic structure or a musical process or a particular harmonic concept for instance and then construct the piece around that theoretical starting point.

Most times, there is a mix of intuition and theory. I think both intuition and intellect are necessary to make something that has an emotional core but also works as a crafted piece of art. The craft makes the emotional aspect of the piece work properly – like having an good idea for a story but also telling the story well.

Often different pieces of music, usually composed around the same time with similar approaches, group themselves into projects or usually, in my case, concept albums.

LN: What ignited your musical passion?

NC: I’ve been fascinated by music for as long as I can remember, and since a very early age have been able to pick up instruments and play them, and improvise my own ideas on them. It is something that I always seemed to have an innate ability to do. For me the motivation was always to create my own music.

LN: You have collaborated with many artists…..Describe the process and was it enjoyable or not?

NC: Every collaboration has a different dynamic because everyone is different.

I think if you are collaborating it is important that you don’t tread on each others toes, and that the collaborators are bringing different skills to the table. I work well with people who can do things I can’t (and I can do things they can’t).

What is also exciting about collaborating with other artists is that you can get results you would never imagined on your own.

A caveat however is that, if I am honest with myself, as an artist I invariably want to be in charge and have the final say on things and don’t like compromise if I am not happy  with aspects of the work, so probably most collaborations with me are dominated by me to an extent.

The project I mentioned earlier with Una Quinn has been a different sort of approach to collaboration for me, which is that of a contributor. If you are a ‘contributor’ to a project it means you need to have the grace to let someone else lead the direction of the project whilst along the way injecting some of your DNA into it.

LN: What does the immediate future hold?

NC: I think more performances by After the Flood and more solo performances. I will go back into the studio probably later in the year to work on an EP length prog-rock album and a more introspective/ambient concept album.

Neil Campbell appears at 81 Renshaw Street, Liverpool on 4th April 2019. Tickets available from the venue or from Eventbrite.com.