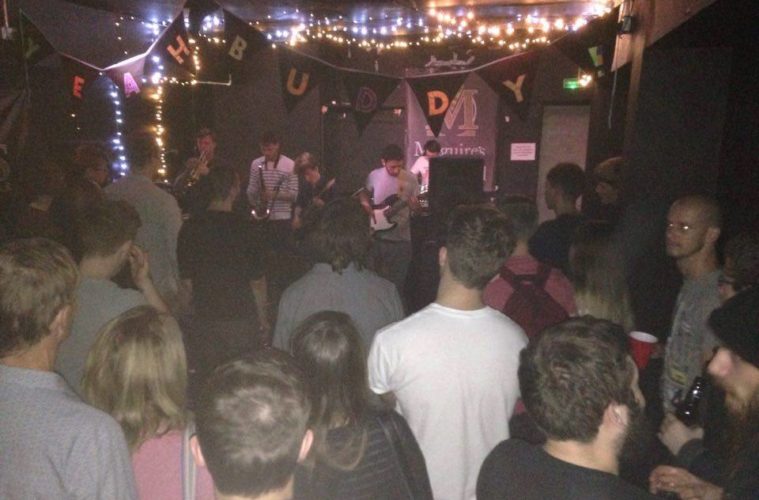 We decided to put Liverpool’s Independent Music Promoters in the spotlight for a change….

Liverpool seems to be enjoying a musical resurgence of late with an abundance of quality gigs across the city. From attracting big names to the Echo Arena to the sold out shows at the O2 Academy and the fresh musical talent being given the opportunity to shine in small independent venues.

Everywhere you turn in the city centre nowadays you are never too far from live music and this is in large part down to the hard working independent music promoters.

The work of the music promoter is usually overlooked by gig goers. You see a gig advertised, you get your tickets and you go and watch the band. Any thought processes beyond that are not usually necessary and that’s fair enough. But for the promoter the work starts months prior. Deciding the venue, booking the bands and selling tickets then hoping that you can break even after the slog of it all.

A love for music is both obvious and essential for music promoters as well as determination and bucket loads of self-motivation. Here we look at some of the key independent promoters in the city and their passion for the business.

Stalwarts of the DIY scene in Liverpool, Yeah Buddy have been putting on incredible shows for years. They are responsible for making Maguire’s backroom what it is today – a thriving independent music venue. It also happens to serve incredible pizza. Two of life’s finest things!

Yeah Buddy describe themselves as a community for the unsigned, independent and DIY music scene. Most notably Yeah Buddy are a DIY music blog but are one of the first in our list here who started to host their own events. Music Blogs are obviously a good source of new music talent as they discover and write about emerging acts all day long so it seems like a good progression to bring the bands to a local stage so they can really show what they’ve got. False Advertising are notable as an early Yeah Buddy find, performing at this year’s SXSW music festival in Austin, Texas. Curating stages at local festivals throughout the year they are a trusted voice on the scene.

In the space of a year Out of Context have established themselves in as a versatile independent promoter. They have produced some brilliant R’n’B, hip hop, pop line-ups as well as supporting the indie rock scene.

They celebrate their first birthday they put together another fantastic event at 81 Renshaw Featuring MC Nelson, KYAMI and Blue Saint. Get tickets here.

Relatively new to the scene but not to be underestimated ICYMI are bringing a diverse range of the next biggest stars to Liverpool. Born out of (you guessed it) a love for music, ICYMI saw one of their favourite emerging artists posting on social media asking fans which cities they should play on their debut UK tour. From there ICYMI went on to arrange a gig in Liverpool’s Pen Factory to a healthy crowd and they were hooked in the world of promoting from that moment on.

One of their aims is to bring more talent to Liverpool, rather than or in addition to, our neighbouring city Manchester. Forward thinking in their approach to booking exciting acts and ensuring they play to decent crowds, ICYMI are stirring up the scene. Often their gigs are free entry, which leaves you with no excuse not to go!

Check out ICYMI’s full gig line up on their Facebook page here.

This Liverpool-based, UK-wide emerging music website have their finger on the pulse of some of the finest up and coming UK touring artists, having previously curated events featuring The Van T’s, Saltwater Sun, Indigo Velvet and Berries.

To find out what gigs they have coming up visit their Facebook page here.

Primarily a record label and music publisher Klee also know how to put on one hell of a gig. Known for their eclectic mix of musicians signed to their label they also have a brilliant approach to their live nights. The Klee Music Acoustic Nights which started earlier this year feature three singer-songwriters who each play a short set of their own material, and then come together at the end to sing a couple of songs as a trio. However, they will also perform a cover version of a song composed by the artist next to them!

Each night has been a resounding success with the final event of the year coming up, you can grab your tickets here. Applications are now open for the Acoustic Nights 2019 programme and you can find more information here.

A formidable force on the Liverpool music scene Mellowtone are best known for their acoustic showcases and you can expect influences including Folk, Blues, Country, Roots and DJs playing everything from the obvious to the obscure. Mellowtone Records is also home to some of the finest local artists with Nick Ellis, Edgar Jones and Seafoam Green on the books. To keep up to date with Mellowtone’s latest gigs and record label releases visit their website here.

Record label and promoters Hail Hail are specialists in showcasing ‘Lo-Fi music’ artists in various venues in the city. Founded by Sam Banks, Adam Burns and Connor O’Donnell who all play in bands in various parts of the country, their passion for music shines through in their Cult DIY label.

“I suppose growing up as a teenager in Liverpool, a city which is and always has thrived with amazing culture/arts and a fantastic history was a major influence on me musically. I love this city and everything it stands for. That is why I wanted to become part of the underground community.” Says Sam.

Music Blog Boot Music hosted their first live event at the Zanzibar in March featuring two local bands (Mosley Bar and Factory) plus Swindon’s high tempo indie rocker Misfires, who look like they have a bright future ahead of them. It was an exceptional debut event for Boot who’s aim for promoting the live scene is twofold;

“Firstly, we wanted to try and be part of the resuscitation of the Liverpool music scene having seen it be crushed by large property development companies closing venues to make way for offices etc.

Secondly, we wanted to build a circuit that would actually benefit the artists. We felt we were in good position to do this as we are independent , not money focused at all and so we promote all our artists before and after the event , featuring them on our site , reviewing all their new music and interviewing them to promote any upcoming tours , gigs or new music!” says Boots’ founder James Booton

Boot’s next project? “We are looking to plan a huge charity gig, with carefully selected , politically aware bands playing –  with all profits going to save the children’s refugee appeal” says James

Keep an eye on Boot Music and their latest events on Facebook here.

Have we missed someone off our Liverpool’s Independent Music Promoters guide? Comment below so we can add them to the list.