Liverpool has plenty of restaurants, a variety of different places from cool independents to more established names. What Liverpool doesn’t have is a Chiquitos and that’s a little bit heartbreaking. However, if you’re willing to put in a bit of leg work then you can be greatly rewarded at either their Ellesmere Port Restaurant or as we chose, their Southport location.

A firm favourite of ours, we were excited to learn that they had launched a new menu and decided that it would be within everyone’s best interests if we sampled it. On arrival we were led to a comfy booth and handed menus. Most impressive of all was that our server also placed down a Gluten Free menu. One of our party is a gluten free-er and the size of this menu was what was really impressive. She even said it was the biggest gluten free menu she had ever seen in a restaurant that wasn’t specifically aimed at non-gluten eaters!

But firstly we scanned the cocktail menu and ordered a pitcher of Frozen Strawberry Daiquiri which was refreshing and just what we needed before some spicy Mexican treats and kept us happy until our starters arrived.

We ordered starters of nachos to share and peri peri prawns. The nachos were an enticing starter before the main meal, the crisp nachos had been gently heated and generously covered with the usual accompaniment of salsa, sour cream, guacamole, jalapenos & cheese. packed full of flavour. The peri peri tiger prawns were served in a tomato based sauce with a kick which my friend was very complimentary of. 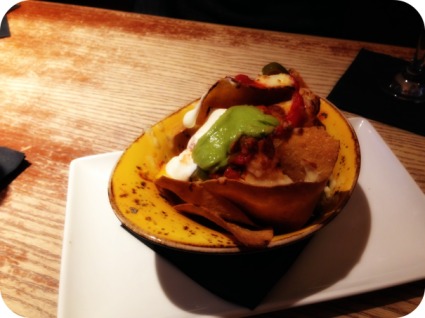 For our mains we ordered ‘Chicken Enchiladas’, the ‘Pulled Pork Chimichanga’ and the ‘Chicken & Chorizo Tacos’. The Chicken Enchiladas were served covered in a rich tomato based sauce topped with cheese. The enchiladas contained plenty of chicken and the right amount of rice. All too often do you find that rice is stuffed in to make up for a lack of chicken so it was great that Chiquito’s had got it the right way around.

The Chicken & Chorizo Tacos were served with a grilled corn on the cob and side salad. The three tacos were an ideal portion for a main and were suitably filling. The crunchy tacos were full of flavour and nothing was left on my friends plate! The corn on the cob went down well especially as we discussed it appears to be a rarity on restaurant plates these days.

The Pulled Pork Chimichanga lived up to the expectations of the first two mains. The lightly fried tortilla was stuffed full of pulled pork, rice, refried beans and cheese and my friend commented that unlike some Chimichanga’s he has had in the past it was well cooked and not at all greasy. It was accompanied with Chiquito’s rough cut fries, guacamole, salsa and sour cream.  The mains portion sizes were enough to leave us suitably full but not uncomfortably so.

We just about had room to share a dessert which we selected off the gluten free menu, the warm chocolate brownie with ice cream. When it arrived we were tentative to dig in as we were all feeling stuffed but after taking a bite, we were all back in for more and it was polished off in no time.

Making the trip to Chiquitos is most definitely worth it, the only question is when will there be one opened in Liverpool please?

Our Top 10 Best Restaurants In Liverpool

Playing With Fire Is The Sublime New Single From Helen Maw