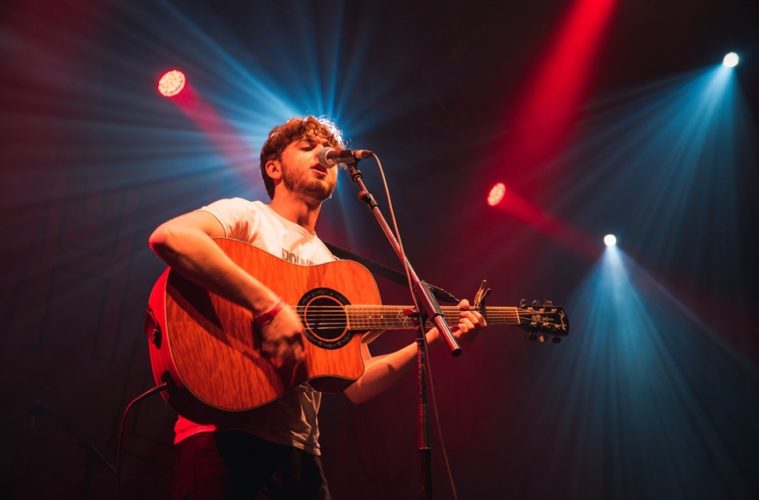 Liverpool Noise catches up with local lad Ben Burke following up on his first single Leaving Tomorrow, his Merseyrail Sound Station development programme and his current mission to bring his classic Liverpool sound to the ears of the world.

Liverpool Noise: So first of all, Ben, your brand new single ‘Leaving Tomorrow’ was released on 9th August, where did the inspiration come from for this one?

Ben Burke: The inspiration is a mix actually, it’s from some of my own life experiences and also from my brother who was going away travelling around Europe for a month. He left a lot of things behind, including his girlfriend, but they eventually met back up again so it’s a bit of a love story but also a bit sad at the same time. So that’s partly where the inspiration came from but then a lot of it was my own like I said. Just sort of the struggles of modern day life make you wanna get out of here.

LN: You sound happy that you’re leaving! Is the underlying message behind the song a positive one or a little more on the sad side?

BB:Again, it’s almost both. Negative and positive. Parts of the story are how the person in the story started off in a bit of a rut, in a bit of a bad way, the second verse in particular explains this. But then it’s remembering the good times and leaving, finding something new. So it is overall positive but there’s a lot of negativity running through it aswell.

LN: And you oversaw all the instrumental recordings aspects yourself too, was that down to past experience and it was a conscious choice?

BB:I first started out at around 11 wanting to play lead guitar. wanting to be Jimi Hendrix or whatever, so I learned how to play lead to a fairly good standard and got asked to be in a band playing bass and I thought, i’ll accept the challenge. Never played bass before but picked it up pretty fast and I really enjoyed it too. All the way through my music career i’ve sang so basically it was just a case of, I haven’t got a band, but i’d come up with the chord structure then the bass, lead & vocal harmonies would pop into my head and I thought I might as well do this myself!

So in the end, when I did go into the studio the one thing I can’t do is drum. I’m not a drummer. I was recommended a session drummer called Ollie Gorman, a friend of the engineer Danny Woodward (Whitewood Recording Studio). His recommendation was spot on, he ended up coming in to play down the beat and it was happy days.

LN: The drum beat has a really nice, country/classic Liverpool vibe, is that the music you’ve always tried to emulate?

BB: Yeah, a bit of folk, a bit of merseybeat, blues so yeah!

LN: Potentially your biggest gig so far, playing onstage to 50,000 fans over in Madrid for the Champions League Final. Can you try and describe what was going through your mind and the journey to that point?

BB: It was completely insane. No it was fantastic definitely the biggest gig of my life to 50,000 people. Also, turning up to the airport at 4am, getting the plane paid for by the club and meeting up with John Power (Cast) at the airport and everyone else involved with Boss Nights. That was a surreal experience as I grew up listening to Cast so that was like, “what is going on here?”. A bit star struck to be honest.

LN: So these Boss Nights, and the lads involved like Jamie Webster, they must have been loving it aswell?

BB: Yeah, Jamie was already over there actually. The rest of us flew over, got there nice and early, went out, had some scran and came back to get a feel of it. Absolutely boiling hot it was like a sun trap in the middle. Surrounded by high rise it was roasting. But I love all that. So coming out onstage to all those people was scary at first but it was one of those, I stood there backstage looking out to the crowd and thought I can either go out here a bag of nerves or more confident than I’ve ever been before. So, being the kind of person that I am, I jogged out on stage with my hands in the air. Unfortunately one of the stage crew had left a bottle of water open on stage and I managed to volley it into the crowd by accident. I thought, that was a good start, and it probably cooled them down!

But all in all, mind blowing. I actually playing Leaving Tomorrow at the end of the set. There was nothing to lose and I was bringing it out in the next few months. It actually went down really well. I think the guy who was running the stage was Dave Pichilingi who runs Sound City and Modern Sky Records. He was really impressed so, fingers crossed we’ll see what happens there.

LN: So going from the Boss Nights was it all good practice in the lead up to this gig almost?

BB: To be honest, I think the last 4-5 years of my life have been building up for a gig like that because I gig regularly around the circuit making my life as a musician. I’ve got bags of confidence but it was still massively nerve-wracking. Just gigging regularly for the last few years, especially with my last band The Stamp, we went around Europe which gave me a lot of experience and confidence. Hopefully more to come!

LN: Obvious a very proud scouser, are there any current Liverpool artists you’d love to share a stage with?

BB: Definitely. There’s a lot of talent around right now. Bags of talent around the city. There’s plenty of bands i’d love to gig with. I know Red Rum Club doing really well, and my mate Timo from The Tea Street Band. There’s all kinds it’s just a case of building up the fan base. It’s a case of getting to know these people, seeing if they dig my stuff and if I can get support here and there. Networking and getting my name out there and seeing how it goes.

LN: And finally, what’s in store for Ben Burke next? Anything brewing on the horizon?

BB: Well i’ve got the Florrie Fest this Saturday 24th August with the likes of Pete Wiley, Clean Cut Kid and Ali Horn playing. Loads of others on the bill. I’ve got a competition running on facebook to win 2 free tickets, it’s coming up to the deadline with Thursday being the last day and i’ll see who’s won. All the details are on my Facebook to see how to get involved on that one.

I’ve got 81 Renshaw Street coming up in September with Nothingville which should be amazing. Also on the 24th October in the new Jimmy’s bar supporting Johnny Lloyd (The Tribes). I think Jimmy’s is renowned for good gigs and he’s got a load of good support on that one. Finally, i’ll definitely be bringing out another song by the beginning of October. The aim is to get four solid tracks, bring them all out and go for a bit of an EP launch. Sell some CDS, t-shirts and all that!

BB: Thank you! Have a boss day.

To find out more about Ben Burke and his upcoming gigs visit https://www.facebook.com/benburkemusic/

Listen to Leaving Tomorrow on Spotify