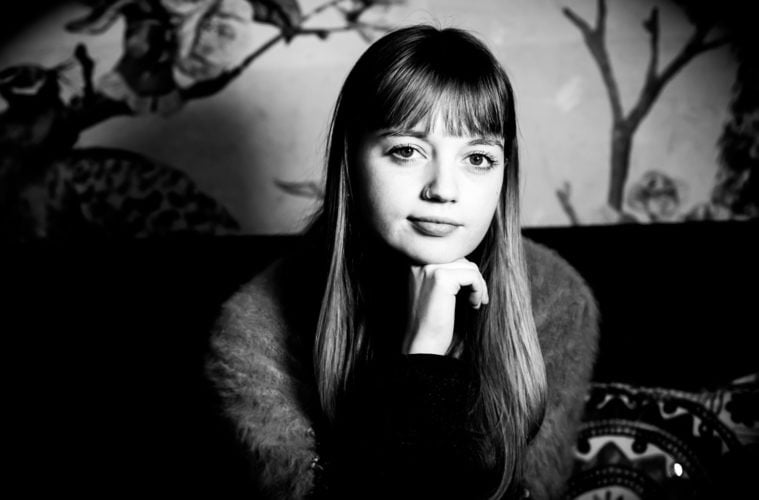 Esme Bridie is currently in the eye of a very creative storm. We caught up with her amongst all the hectic activity….

EB: Honestly, I am just about coping haha! There is a lot of going on at the moment, but it is all really exciting stuff! I just have to try and get early nights where I can.

LN: How did things come about? You seem to have done open mics and good support slots, and then this?

EB: Yeah I started playing open mic nights in Liverpool when I was about 16 and then fell in love with performing. At about 17/ 18 I was gigging a lot and I guess it just progressed from there really. When I was 19 Klee music got in touch, as they were interested in working with me and now here we are having just created an album!

EB: It is strange because I have been used to working on my own for a long time. Working with Colin McKay the producer was really nice because it meant there was someone else to bounce ideas off. It also opened me up to things I wouldn’t have thought of on my own. Having a team around me now is actually amazing. I have the privilege of working with Steve Kinrade, Joe Campbell, Andrea Lynch, and Dave McTague whom all have a different role to play like radio plugging or promotion for example. This means my music can reach further than I could ever make it on my own. I so appreciate the work they are all doing! Klee Music have done such a great job! LN: What did you learn from making “Today It Rains”?

EB: I learnt so much, mainly about the process of making an album and all the pieces to the puzzle that have to come together in order for it to work. Every role is so important, and time management and organisation is key!

LN: When you read the reviews, do you often think that the journalist has picked up on something that you weren’t aware of?

EB: It is so wonderful reading the reviews and hearing what other people have taken from my songs. One that really stands out to me is the review in GIGsoup by writer Bronte Schiltz as she talks about how my album took her “on a journey”. Dennis from “Liverpool ETC” was amazing as well.

LN: The songs seem to be in a continual state of flux….when listening to them repeatedly, they seem to “change” – for example in personal emphasis, inclination….Is it the same for you, as the composer when you listen back?

EB: For me there was a reason/ emotion at the time of writing each song. So when I listen back it puts me in that moment and I can kind of feel that emotion again. I am an emotional writer so that side of it is quite strong for me. I guess in this way the meanings always stay the same for me.

EB: Ellie and Thom are two wonderful singers and songwriters that I met whilst gigging in Liverpool a few years ago. They both have amazing voices, which I felt would be a lovely addition to the album. As well as this they’re both friends of mine, so we had a lot of fun recording together!

LN: What’s your impressions of the Merseyside music scene at the moment? Do you feel part of a “scene”?

EB: I love the music scene in Merseyside. There is a really good supportive vibe amongst audiences and musicians. It does feel like a scene. There are lots of singer- songwriters who are all kind of connected in a way. I love being part of it. It does feel unique compared to other places I have gigged in.

LN: Any other artistes that you think are starting to make real headway that you have noticed?

EB: Sophie Whittle is brilliant. I had the pleasure of gigging with her last month at 81 Renshaw Street. She has a really unique song writing style and voice, she is quite enchanting to watch. I think she will be on to good things in the future!

LN: Plans for the immediate future?

EB: On Friday the 9th we are having a listening party at Avenue HQ. I’m really looking forward to this, it is a chance to listen to the album before it’s released and chat to the people involved. The 22nd of March is the official album launch at Studio 2 Parr Street in Liverpool. As well as this I am playing in Leeds, Manchester, London and York as part of my album launch tour. This month is going to be crazy I can’t wait!