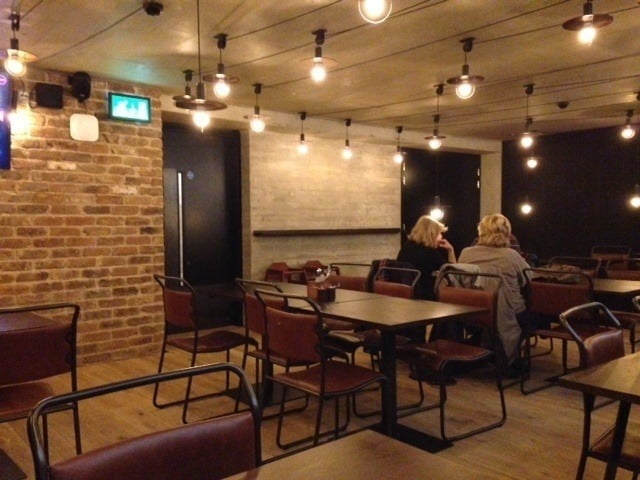 The Daily Telegraph reported last week that, as the fabulous new Everyman Theatre opened, Liverpool got its ‘heartbeat’ back, based on a quote from Gemma Bodinetz, the theatre’s Artistic Director.

The article referred to the old subterranean bistro as a place where ‘plots were hatched and love affairs blossomed over bowls of spaghetti and flasks of cheap red wine’. No spaghetti on the menu of the new bistro and no sign of any flasks of red wine; cheap or otherwise.

The new set-up is a great re-imagining of the former eatery: all exposed brick, minimalist tables and chairs and simple, but clever, lighting. It’s still split into different rooms and feels similar, despite being much more modern and fresh. Gone is the queuing for food and choose-your-own of old; it’s now waiter service which was kind of a surprise.

The menu is simple with a few great choices and a specials board. Most menu choices are available as either big plates or small plates and they offer two small plates for a tenner. There’s also a short pudding menu which will require further attention at a future visit.

As you’d expect, you get service with a smile from everyone and fellow diners are the same eclectic mix they’ve always been- business people, arty/muso types, a few beards-and-media-glasses and a smattering of students. It’s got a lovely buzz about it and it would be all too easy to forget the time and stay all afternoon whilst indulging in some quality people watching.

I’ve realised, as I write this, that my kids will get to enjoy spending time here in the same way I did: when my parents brought me when I was a kid, when I came later on as a teenager with friends and far too many unsuitable boyfriends, when I attended parties and events here as a twenty-something. There really aren’t many places with that sort of enduring appeal and that’s to the bistro’s credit.

Upstairs there is now a light and bright street cafe and bar, open from breakfast right through the day, which offers further choice.

Overall, it’s a very welcome return for the bistro and, whilst some great new places have opened in the city during its hiatus, it will have no trouble attracting custom; both those who remember it fondly from before and those who just experience its new incarnation.