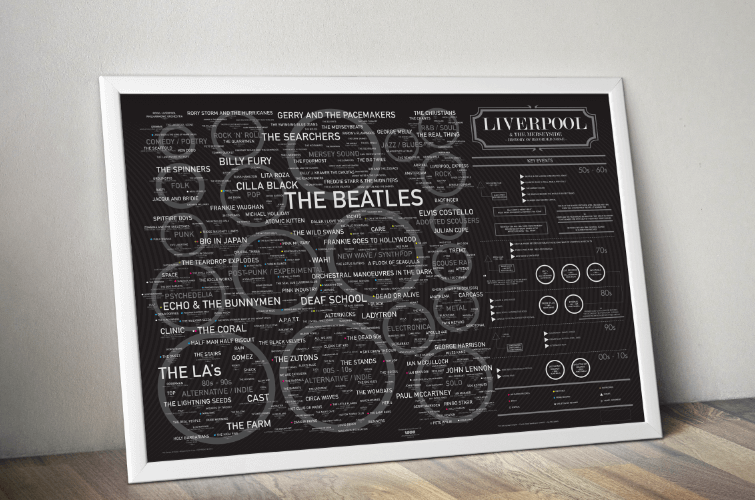 It is the ideal artwork for those who love Liverpool music and for those who want to know more about the colossal music history of Liverpool and the Merseyside from the 50’s to present times.

Besides being the hometown of the most popular group in music history, Liverpool holds the Guinness record due to being the number one record capital in the charts. It was also the hometown of Eric’s and Cream – clubs that defined British music in the 70’s and 90’s respectively – and to this day, Liverpool remains as one of the most prolific and diverse music capitals in the world.

The print has been researched and designed by Alejandro De Luna, founder of The Sense of Doubt©. The goal of The Sense Of Doubt© is to capture and express cultural connections through unique infographic and evoking prints – wall art that reveals unexpected associations and joins the dots between pop, art, music, literature and the world we live in. The Sense Of Doubt© started in late-2017 in Manchester, UK and now, it operates worldwide from Berlin, Germany.

The prints come hand signed and are carefully packed securely in postal tubes for safe delivery. You can pre-order the Liverpool Music History Print via The Sense of Doubt Website.