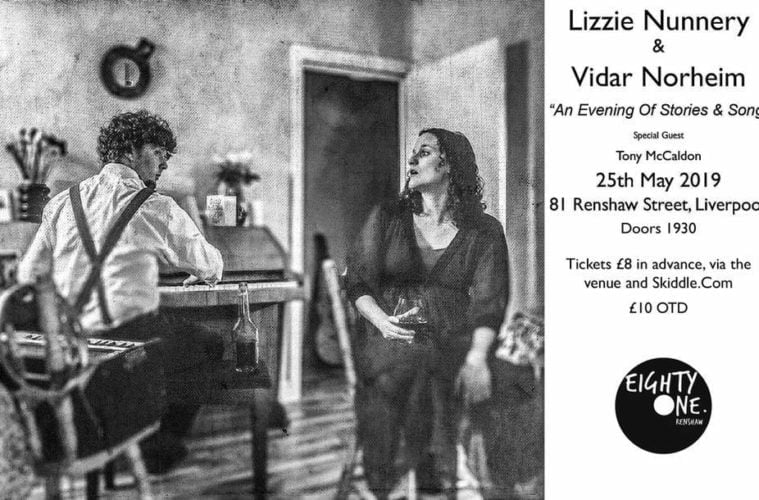 Liverpool Noise caught up with Lizzie Nunnery and Vidar Norheim ahead of their up- coming show at probably Liverpool’s best small venue, 81 Renshaw Street. We talked about past projects, new projects and artistic influences….

LN: What have you two been working on in the last twelve months, both individually and collectively?

Lizzie: We’re always working on new songs together. Over the last year we’ve been piecing together material for a new album and live show called The Wilds. It’s going to be a mix of linked short stories and songs, themed around time, space and longing. It all set in Liverpool, and about that desire to find some freedom in the universe. We’re still working on it, but we’ll be playing some of that new material at our gig in 81 Renshaw on Sat 25th May. Meanwhile I’ve been writing my first feature film script which has been a massive exciting learning curve, and working on a new series for BBC Radio 4, that’ll be broadcast in the summer.

Vidar: I have been working on music for a new play by Sian Owen called ‘How Soon is Now’ for Box of Tricks Theatre? I’ve been playing a lot of Brazilian music with a new Liverpool band called Baiana, and been touring as a drummer for Liverpool legends China Crisis. Plus I’ve recorded percussion on Gary Daly’s new solo record Gone From Here, and on Laura J Martin’s forthcoming album. So yeah, it’s been busy!

LN: Lizzie, your last play “To Have To Shoot Irishmen” was very well received. How long did the writing process take, and did you approach this project any differently from your earlier works?

Lizzie: That one took ages. It was a really usual process because it was commissioned in 2008 by a theatre company in Galway called Druid. When they weren’t able to produce it, it kind of hung around unfinished on my desk and in my thoughts for a decade. Every now and again I’d go back to it and tinker with it again. The script’s based on real life characters involved in the Easter Rising in Dublin 1916, so I felt like they were tapping on my shoulder, reminding me not to let it go. In the end I got frustrated waiting for someone else to produce it, so did it myself through my own company Almanac Arts. It turned out to be more work than I could ever have anticipated, but it was worth it.

LN: Vidar, have you any plans to follow on from the 2016’s Blind Carbon Copy?

Vidar: Yes the new EP is being finalised this week! So new tracks from it will be released very soon. I’ve worked with Dave Berger from Outfit as producer and mixer again and I’m really excited to share the new songs.

LN: The track “The Sirens” is very interesting. What as as inspiration behind it?

Vidar: I guess it’s about the moments when you feel the weight of all the problems of the world on top of you. It was originally a demo for my old band Wave Machines so James from the band is still on there playing synth and backing vocal along with Tord from the Wombats who produced it.

LN: As a duo, have you any plans to follow up the “Black Hound Howling” album?

Lizzie: Yes! The Wilds will be the next one and we’re planning a tour alongside it. Just bear with us… we’ll get there!

LN: Which artists have had a direct influence on the art you both create?

Vidar: Most of the above plus Arthur Russell, Wildbirds and Peacedrums, Bugge Wesseltoft, LCD Soundsystem, Robert Wyatt, Owen Pallett and many more…

LN: Your show at 81 Renshaw Street is billed as a an evening of story telling and songs. Can you give us an idea what we can expect?

Lizzie: Alongside new songs and storytelling from The Wilds, we’ll play a handful of older songs from previous albums and EPs. That’ll include a song or two from our play with songs Narvik. We’ll be joined by Vicky Reid on cello and Jess Holding on violin, which should be a lot of fun! It’s been a while since we did a Liverpool gig so we’re really looking forward to playing to friendly faces!

Lizzie Nunnery and Vidal Norheim appear at 81 Renshaw Street on Saturday 25th May 2019 for an evening of songs and story-telling. Support from Tony McCaldon. Doors 1930hrs. Tickets available from Skiddle and 81 Renshaw Street.