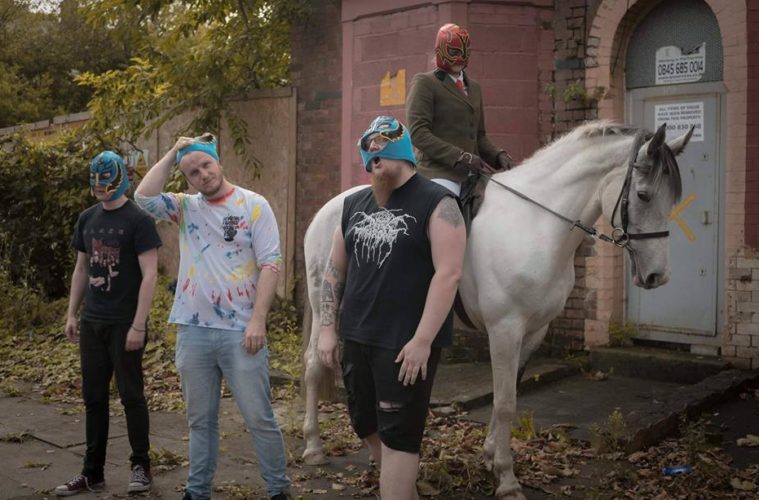 Salt the Snail Hit Back with New Single and SNAILMANIA Anarchy

Since plummeting onto the Liverpool music scene with their caffeine-fuelled debut ‘Coffee’, Salt the Snail have been busily working away behind-the-scenes. Amidst a number of live slots last year, the band have focused their attention towards the studio, prepping for more riotous belters to be fired out.

Newest single, ‘Spanish Announce Table’, follows on from where ‘Coffee’ left off, propelling the chaos tenfold. Once again, the video is a perfect pairing to the band’s earsplitting music. Armed with all the props necessary for an anarchistic revolt (look out for the wrestling masks, banners, a stray shopping trolley, and even a white stallion), the band (and friends) race through the streets with the appropriately blaring music acting as the backdrop.

The track isn’t too out of place in today’s current political turmoil: it’s angry, it’s disorderly, and it’s far from pure. At just 2:19 in length, you’d be mistaken to think that the band can’t deliver is such a short space of time. In fact, they’re experts at serving up a strong dose of nihilistic bedlam, and no timeframe can constrain them.

The single is due for an official release on Thursday 1st February. To coincide with the release, the lads are hosting a SNAILMANIA event the night after on Friday 2nd February at The Jacaranda. Since this is going to be the band’s first headlining gig, you can expect a night of pure anarchy with a full set of tracks, and support from Bisch Nadar and Vuromantics. If you can stay standing until the end of the night, make sure you head to the after party where some ‘Salty DJs’ will amp things up on the decks by playing everyone’s favourite rock songs (think Nirvana to Foo Fighters to Queens of the Stone Age, and a bit of Kayne on the side).

Stay tuned to the band’s Twitter and Facebook accounts for all the latest track releases and event line-ups. Give them a listen over on their SoundCloud account and through Spotify.

Tickets to SNAILMANIA can be purchased through Skiddle.