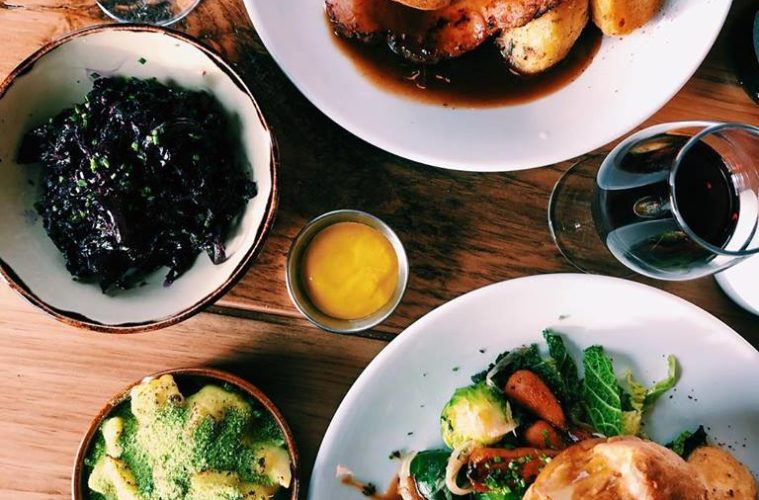 We’ve found the best Sunday Roasts so you can just go and enjoy them. Thank us later!

If there’s one thing we don’t have a shortage of in this wonderful city of ours, it’s incredible spots for us to grab the perfect Sunday scran. And would it even be Sunday if this was anything other than a roast dinner with all the trimmings!? We think not…

With so much choice though, it can be a tough call when it comes to deciding where to go in search of the perfect Yorkshire pud each week – so we’ve called in the professionals. @TheSundayClubReview are a new foodie Instagram page sampling and reviewing the best of the North West when it comes to the humble Sunday roast.

Here, they give us the scoop on where not to miss out on this year for our weekly gravy fix. In no particular order, here goes… 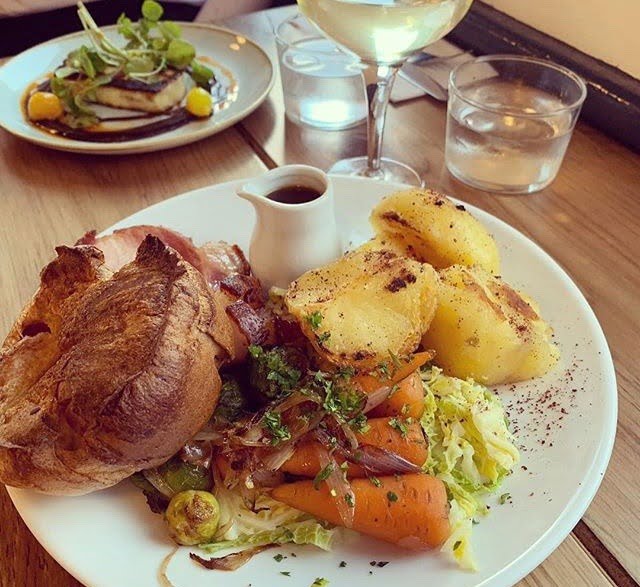 A high contender for the best in the city, and a plate so undeniably good, you’ll want to make the trip even if you’re not local to the Allerton area. Take your pick between Goosnargh corn fed chicken, roast beef, and even Cumbrian salt-aged pork. Each one as delicious as the next, with delectable goose fat roasties and an array of perfectly seasoned veggie to accompany. Amazing stuff from the guys at Maray, proving they’re not just in it for the small plates… 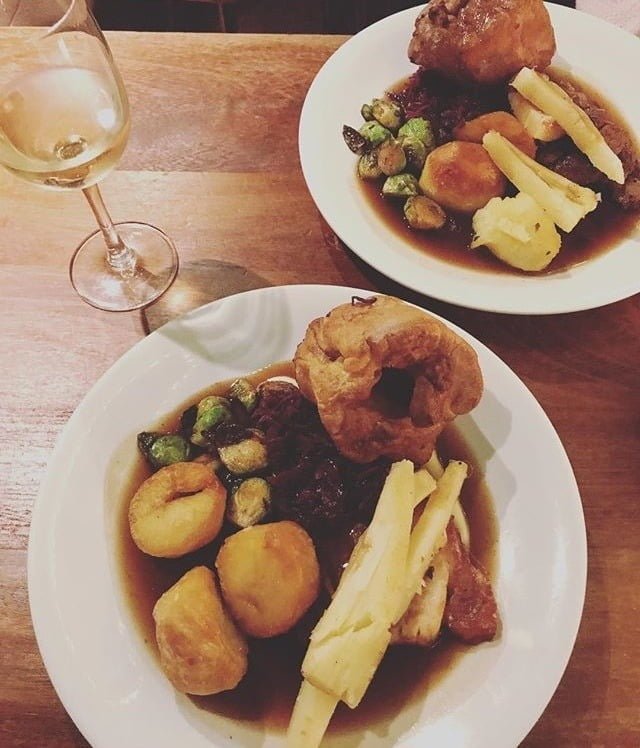 Since opening in 2015, Buyers Club immediately established themselves as local Sunday roasts experts. Their offerings include 2 hour slow cooked beef brisket, roast pork belly, as well as a beetroot and hazelnut nut roast veggie/vegan option, served with all the trimmings. Side note – trimmings include the most perfectly cooked honey roast parsnips in all of the land! All served on a bed of tangy red cabbage with lashings of tender broccoli. 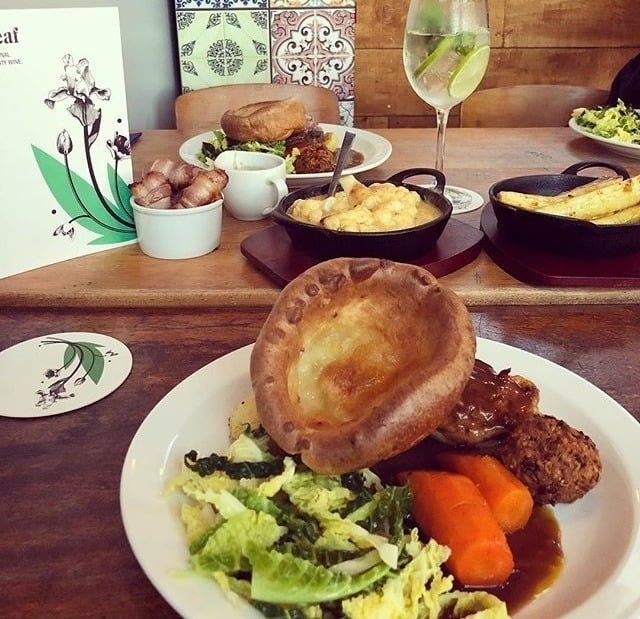 We’re a huge fan of the laid-back haven that is Dockleaf any day of the week. So when they announced their Sunday menu, it was a dream come true. You’ll be hard pushed to find anywhere that does a roast with as many trimmings as these guys – they leave no Yorkshire pud unturned when it comes to their roast offering. Expect cauli cheese, pigs in blankets (all year round), stuffing (YAY!), Yorkshires, roasties…the list goes on. All bases covered. All stomachs full. 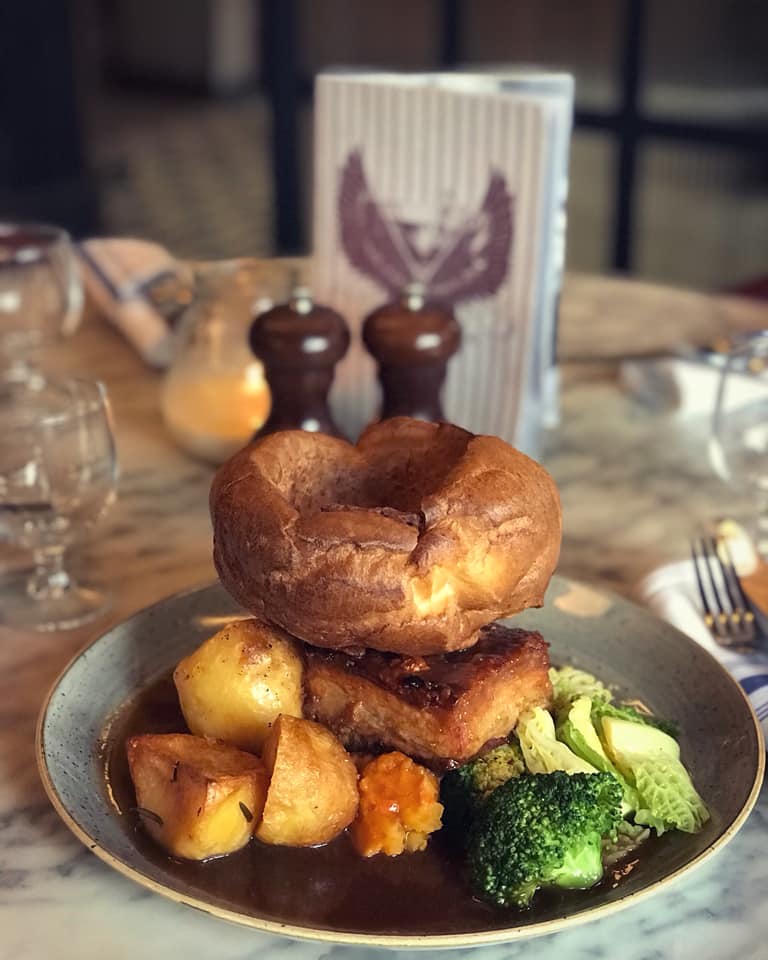 Nestled in the bustling Woolton Village, Liberty Tavern is the jewel in the crown of TV chef Simon Rimmer’s North West restaurants. Much like it’s sister venues, The Elephant and The Viking, their roast dinners are massive crowd pleasers. Liberty may predominantly serve American cuisine through the week, but they have the good old English roast down to a tee. Choose from chicken, beef, vegan nut roast – or our personal favourite, pork belly with perfectly crunchy crackling. The cauliflower cheese is also a total must from here! 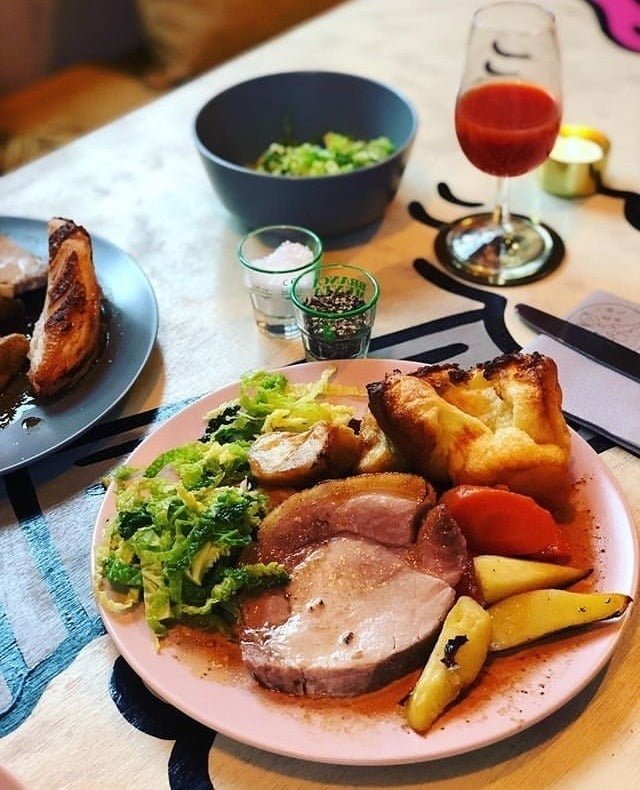 A new kid on the block, Bitter Social has not long thrown open its doors above one of our favourite bar haunts, Furnivals Wells. Since landing in the city (for a short 6 month stay only, for now) they’ve been cooking up an absolute Sunday storm. Their unique take on roast dinners promises to please meat lovers and die hard veggie/vegans alike, with their bold take on the classic plate. Expect surprisingly delightful vegan cauliflower ‘chez’, a unique jackfruit wellington, deep fried peanut butter sprouts – and an absolutely show stopping rolled lamb belly. Roll up, and do so quickly, as they guys here are a pop-up venue and will be gone in a couple of months, until they announce their next venture. *Cry*. 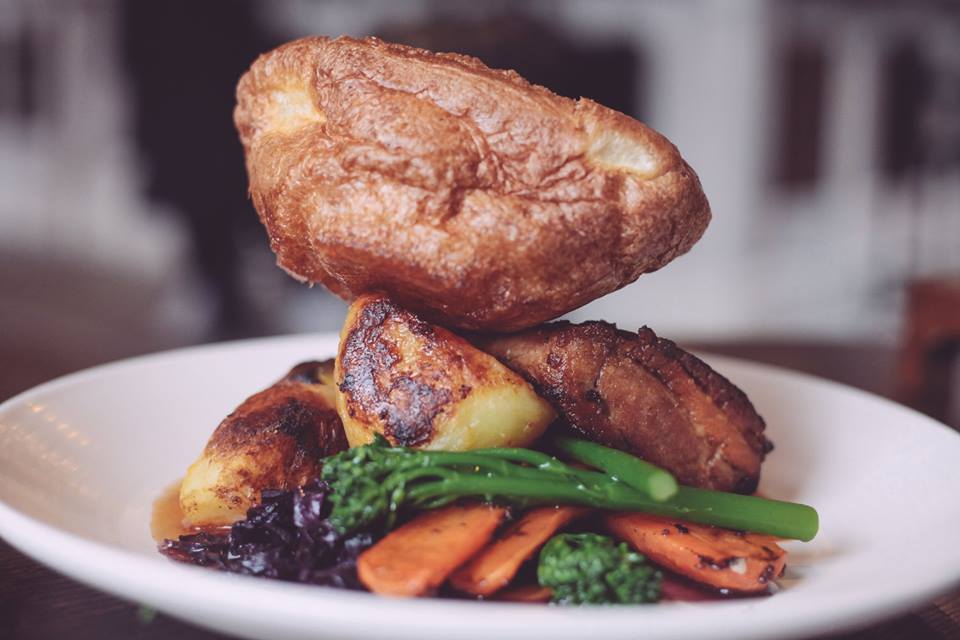 If you haven’t already scoped out The Florist for its beautiful decor – this is reason itself to give this place a visit. Prepare to be transported to a sensory world of pretty foliage and twinkling lights. The only thing more impressive than the rose petals here are the roast dinners… The Florist has a tendency to put a unique floral spin on each of their regular dishes, but manage to keep their Sunday dinners quintessential and classic. The choice here is also unrivalled – lamb, pork, chicken, beef and veggie options. A must visit! 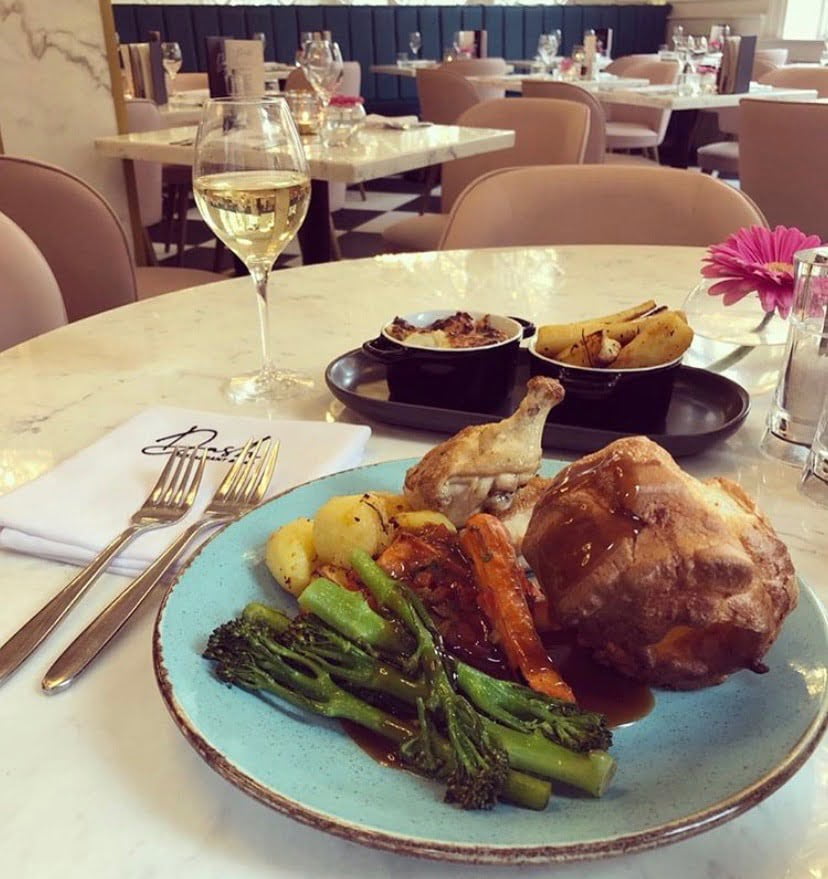 You’ll be hard pushed to find a more aesthetically pleasing venue around right now than Dash on Victoria street. Since recently opening its doors, this place has been abuzz with celebs and those who like their Sunday dinners a little more on the extra side… However they’re much more than just a pretty face. Their roast dinner offering has a couple of surprisingly tasty twists, including their tomato salsa – trust us, it works! It also comes with a host of tasty trimmings, and can be washed down with some of the most inventive and delicious cocktails we’re yet to sample in the city. Get your glad rags on and give them a visit! 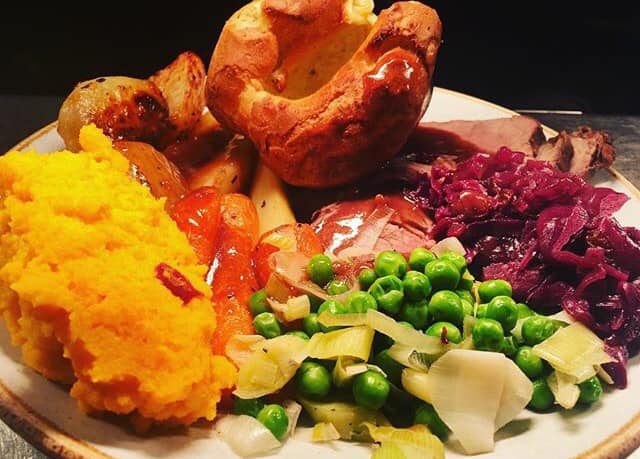 Famous for their ‘Punk Afternoon Tea’ – you may be surprised to hear that hipster venue, The Baltic Social, can also rustle up killer Sunday roasts. Choose between a varying offering of meats and a veggie option – all served up with the fluffiest roasties in the land, as well as other trimmings that include mouth-watering honey roast parsnips and celeriac/carrot mash… 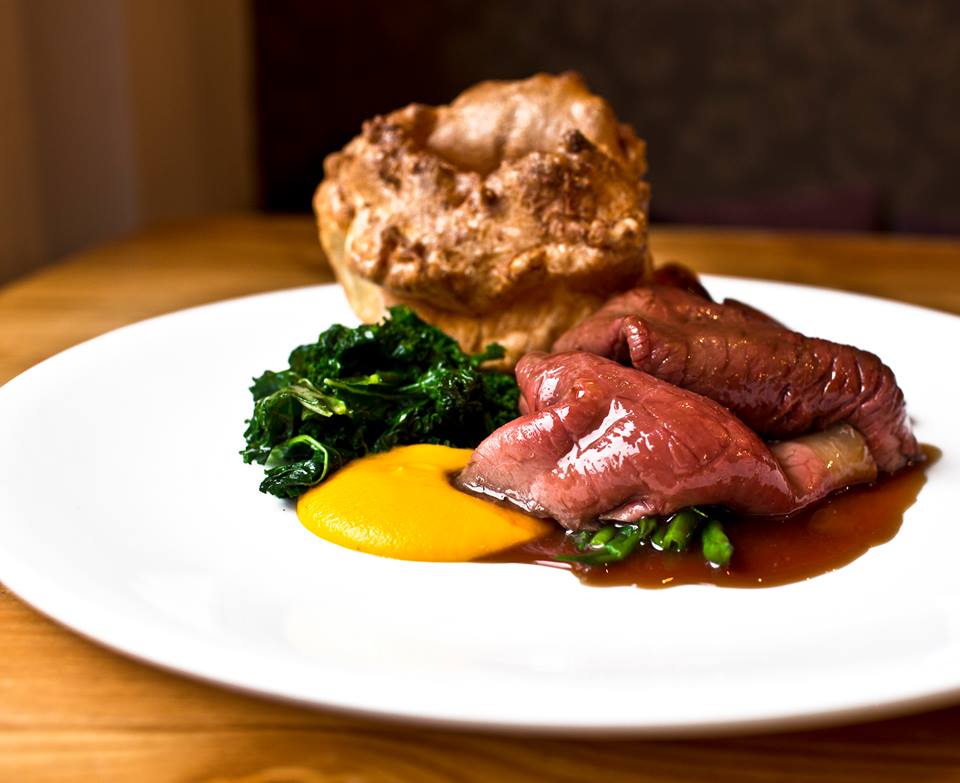 Straight talking chef, Gary Usher, opened Wreckfish in 2017 after a huge crowdfunding campaign which saw him raise an amazing £200,000 for his latest restaurant venture. And praise the Lord he did! Sunday’s at Wreckfish are a total dream. Expect to take your time here and take in the delights of rolled and stuffed pork belly with lentils and buttered kale – or perhaps pan roasted chicken breast, with Jerusalem artichoke puree and roasted courgette? This is Sunday lunch done with a swanky touch. 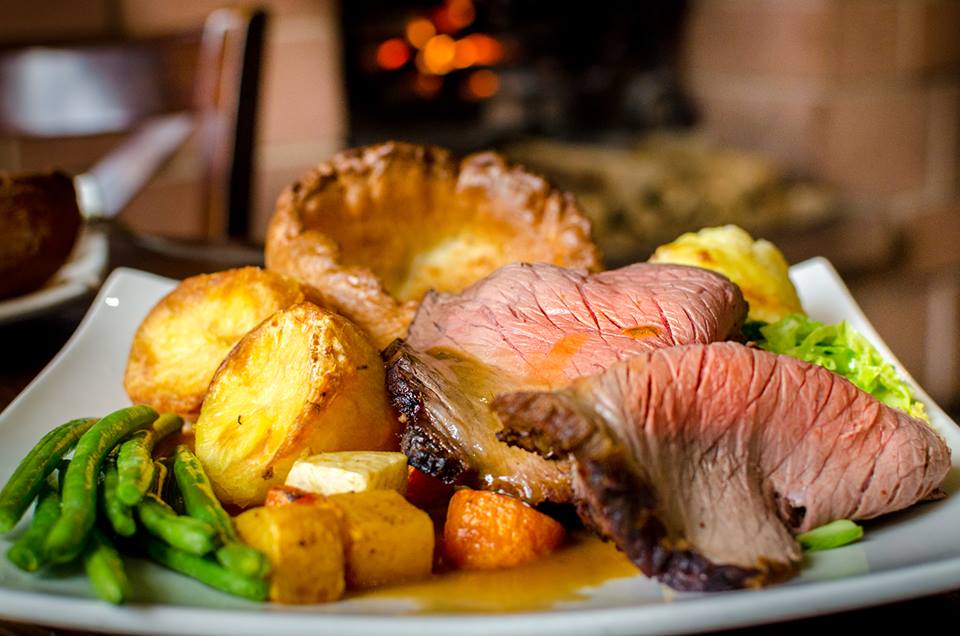 An oldie but a goodie – it simply wouldn’t be a list of locally revered roasts without a mention of these gastro experts. The Monro has been somewhat of a Liverpool roast institution for many moons now. Their selection of fresh meats is varied each week, and they also serve up a luxury veggie option too, all at a price that feels like a steal. They’ve even won awards for their scrumptious Sunday menu. Give it a go for yourself!

So there you have it! Our whistle-stop tour of the best roast dinners in the city. And with the winter months still in full swing, now is the perfect time to get working your way through the list and get your gravy on…

For more local weekly reviews and Sunday gastronomy travels, give @TheSundayClubReview a follow on Instagram, and join them on their weekly pilgrimage to find the perfect Yorkshire pud!

Relaxing Things To Do in Liverpool