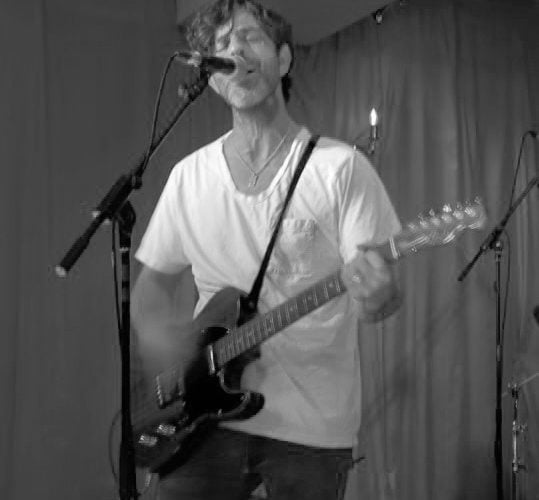 If you are talking about Liverpool bands in the last 30 years who have gained international recognition, that lengthy list is going to include the likes of Cast, Shack, Michael Head and Echo & The Bunnymen. Well, Pete Wilkinson has played with them all.

Now based in London, where he is concentrating on his own Aviator project, he has however recently completed a musical project with Michael Blyth – to critical acclaim. Liverpool Noise caught up with this multi- talented bass player, singer-songwriter, and producer as he prepares to join John Jenkins and Lydiah for the first Klee Music Acoustic Night of 2019. We talked bass-heroes, legendary producers and his affection for jazz…….

Liverpool Noise: Hi Pete – thanks for finding some time to talk to us! You were back very recently in Liverpool on the 10th February playing a gig at the Unitarian Church. How did it go?
Pete Wilkinson: I was back in Liverpool playing with Michael Blyth & The Wild Braid. The show was supporting Ben Ottewell (Gomez) who was really very good. Our performance went well I think. I’m kinda hyper-critical and so always look at were it could’ve been improved, played and sung better. Kind of an annoying defect I guess!

LN: The project with Michael Blyth that you were involved with recently – Indigo Train –  has been very well critically received. How did that come about?
PW: The whole MB&TWB project came about after I was introduced to Michael. A love of music and his colourful life led to us suggesting a couple of writing sessions. Michael brought a couple of songs lyrically formed but without chords or arrangements.We worked on a couple of songs and found it really easy and a joy so we continued over a summer and eventually came up with an albums worth of tunes.

LN: When you guest for other musicians, do you find it hard to remain a “hired hand” and not have the creative input that you have as when you are in the role of producer?
PW: When being a hired gun it’s always a little tricky to be just that .When I did Siberia with Echo & The Bunnymen in 2004 I was involved in the band but not really allowed, other than writing the Bass parts, to be involved with the song writing. That left me feeling a little bored to be honest. No fault of The Buns cos they made it clear songwriting duties belonged to Mac & Will and maybe I just wasn’t good enough for them! I suppose I get my creative fill with Aviator so I’m kinda grateful I’ve another outlet for my songs and vision. Creatively, I’m involved in all sides from production to sleeve design.

LN: Which producers that you have worked with during your career would you say you learnt the most from?
PW: I’ve been blessed with working with some legendary producers, all having an impact on me. Gil Norton ( Pixies, Bunnymen) produced Ocean Rain by Echo & the Bunnymen. I’d put it, easily, in my top 5 albums of all time .When he said yes to recording Cast’s 3rd album Magic Hour I was so thrilled. As a band Cast we’re so tight at that stage I thought there was no where left to go and boy was I wrong! He spent 3 weeks pre production with Keith & I solely on bass & drums.That has got to be one of the most exhausting and brilliant experiences I’ve had. He fine tuned us which I completely enjoyed and made us, I thought, a very different rhythm section. John Leckie (Lennon, Stone Roses, Magazine , the list is endless) was very different in his approach. He’d have to whole band in the studio playing the track .To be honest I sometimes didn’t know what it was we were trying toachieve.There’d be days working on one song . Playing it over & over until he said ‘’There it is , we’ve got it!”. He was after a feel. A much more live & spiritual approach.Utterly brilliant yet baffling at the same time!

LN: Although you live in London, you still have strong links to Liverpool. Having played in some of the seminal bands in Liverpool musical history, what are your observations about the current music scene in Liverpool, compared to what is presently happening in London?
PW: Really difficult question to answer this one. I’m now not really involved in any up an coming music scenes in either London or Liverpool so it’s tricky for me to comment in an authentic way. I tend to go and watch bands that have been around for years.I heard Stealing Sheep on Radio 6 Music the other evening and thought it was really great but they’re not new are they? Here in London I’m very much not involved in any young scenes. I suppose I’m showing my age but without making myself look ridiculous I can’t answer this question with any real conviction! Sorry!

LN: As a young man, you were involved in touring the venues of the North West jazz circuit. Are you still in love with the genre, and who are your personal hero’s, if any, and why?
PW: When I first started playing professionally I was very much involved in the mid-late 80’s Jazz scene in Liverpool. It was so good with many different players who I still play music with. It was such a great foundation in playing our chosen instruments but I soon realised I’d never progress further than the northwest due to my own ability. At the time I was into the obvious jazz greats , Miles Davis, John Coltrane and these influences worked really well for me when I joined Shack. Both Mick & John listened to the same musicians that I listened to so playing music with them was easy! I still to this day listen to Miles Davis, Coltrane and I’m listening to Alice Coltrane as I’m doing this…..Journey to Satchidananda… fuelling the answers!

LN: As a highly respected bass player, and a creative inspiration for many aspiring musicians, which bass players do you rate?
PW: I love this question!! Which Bass players do I rate? How long have we got 🙂  The first Bass player I loved and still do to this day is JJ Burnell from The Stranglers. As a kid, maybe 9 or 10 , I got really into The Stranglers. His sound, his look and his presence was awesome. I totally wanted to be him. Listen to Nice & Sleazy or Walk On By….his playing is like no one else’s around that time. I’ve been lucky enough to meet him too and he was an absolute gent.Probably at the moment I always like Radiohead’s bass player, Colin Greenwood. His bass parts are so good and never in the way of the songs. I think there’s a real talent to that as the songs can sometimes be really complex yet his bass part and playing never get in the way. So beautiful.I also met him but I’m afraid I was really drunk and probably came across as an idiot! Oh well! I also like Jaco Pastorius. Kinda obvious, but such an incredible player. His period playing with Weather Report is great – as is his first solo album.

LN: Any ideas when we may expect the follow-up to the brilliant OMNI?
PW: The follow up to Omni should be with us shortly. Currently recording it with Paul Hemmings who did the first two Aviator records. Really D.I.Y first take stuff! We’ve recording it really quickly and maybe they’ll be things lost cos we’re doing everything in a quick , improvised way but that’s how we want to do it . No taking 2 years to record a record, its a really enjoyable process!

LN: You are next up in Liverpool to play the first Klee Music Acoustic Night gig of 2019, along with Lydiah and John Jenkins at 81 Renshaw Street on the 9th March. Are you looking forward to it?
PW: The Klee Music Acoustic Night is a special one and something I’ve not done before. I love the idea each artist playing a song of the other artists.On the night they’ll be John Jenkins and Lydiah. I’ll playing one of Johns songs which is kinda full circle in some ways.I used to watch and be a fan of one of Johns previous bands The Persuaders. I lived down the road from John Gillan, guitarist in the band Come In Tokio, who showed me the solo in the House of the Rising Son so to be up there sharing the stage and playing a cover version and one of his tunes will be a great thrill! Can’t wait!

LN: Funny enough, John Gillan was a few years older than me at secondary school and his playing at a school concert really turned me onto music! Last question: Sex Pistols or The Clash?
PW: I’m sure some people will have an opinion on my choice but without hesitation it’s always going to be THE CLASH .Their songs , there clothes and the way they could straddle genres , punk , reggae, jazz and all done in such a cool way. I now live 5 mins from Ladbroke Grove, the home of The Clash. I occasionally see Mick Jones & I’m neighbours with Don Letts. Top guys and cool area!
LN: Thanks Pete! See you on the 9th!

Pete Wilkinson appears with Lydiah and John Jenkins at the Klee Music Acoustic Night held at 81 Renshaw Street, Liverpool on Saturday 9th March 2019. Tickets are available from the venue and www.kleemusic.co.uk for £7.50, and £10 on the night. Please be aware that the running order is determined at the soundcheck, so prompt attendance is highly recommended! Doors at 7.30pm.