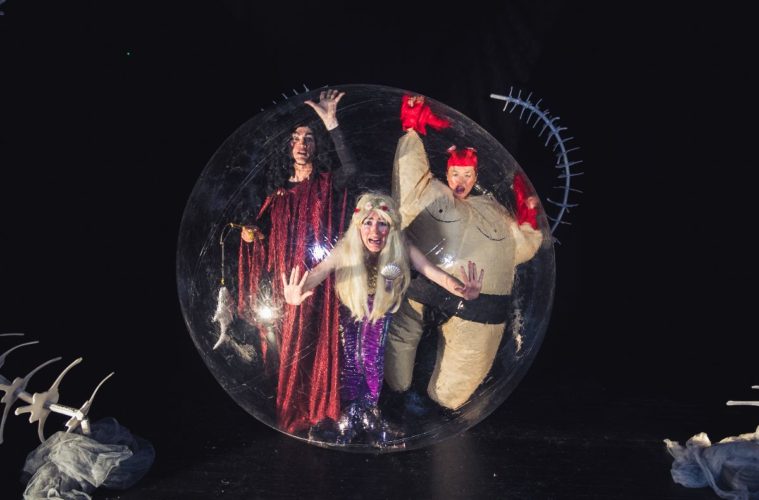 Liverpool theatre troupe, Teatro Pomodoro, return from their lockdown slumber with a wonderfully surreal show at the Unity this autumn.

From October 7 – 9, the Unity Theatre stage will see Ancient Greece turned upside down in a surreal clown odyssey in a show that welcomes audiences to a world where the mythical Sirens are the unsung heroines, Ulysses will never be the hero he wants to be, and Giant Crabs are taking over.

Teatro Pomodoro’s unique and absurd take on Greek Myths and Tragedy is directed by Mark Bell, the creative mind behind West End hits The Play That Goes Wrong and A Comedy About a Bank Robbery.

Simone Tani from the Liverpool group tells us what audiences can expect this October as they team up with the Drama League Award Nominee.

“With ‘Sirens…’ we’ll have audiences laughing as seahorses dance to a Crabs lament, crying as Ulysses abandons his family to go to war in a cardboard ship and wondering who on earth is actually telling this story anyway?”

Those unable to get to the Unity Theatre will still have the chance to experience the show’s absurdity in a specially recorded online performance via the Unity’s website from October 15 – 17, with audience members encouraged to simply ‘pay what they can’.

Having been developed with the artistic input of Petra Massey (Spymonkey), Damien Warren-Smith (Garry Starr) and Ben Phillips, and supported using public funding by Arts Council England, this farce is sure to keep its audience on their toes. Teatro Pomodoro will take you on a bizarre and hilarious journey of Greek epics that will leave Mount Olympus in ruins.

The group itself is based in Merseyside and made up of performers from across the globe, with Carmen Arquelladas (Spain), Duncan Cameron (Canada), Miwa Nagai (Japan), Simone Tani (Italy) and our very own Huyton-born, Leebo Luby.

In collaboration with Liverpool graphic artists, Tales Of The Crypto, Teatro Pomodoro will also create NFTs that are themed on the show. Audience members watching the show at The Unity or online will have the opportunity to get a NFT – a unique piece of digital artwork – designed specifically for this theatrical performance.

Tales of the Crypto was born from the minds of artists who decided to bring their love of horror and zombie films together via NFTs on the WAX blockchain. WAX is not only carbon neutral but is also working on ways to reduce carbon emissions.

“Making the audience cripple with laughter every 30 seconds…the trio are able to keep a crowd blissfully amused with their clowning brilliance and performative zeal” – Bido Lito!

Teatro Pomodoro is dedicated to create cutting edge theatre that explores how the anarchic qualities of clown and bouffon, and the relationship between the performer and audience can create a unique theatrical experience.

Sirens, Men and Crabs runs from October 7 – 9 at the Unity Theatre in Liverpool with online performances airing from October 15 – 17. Tickets are available from the Unity’s website at unitytheatreliverpool.co.uk.