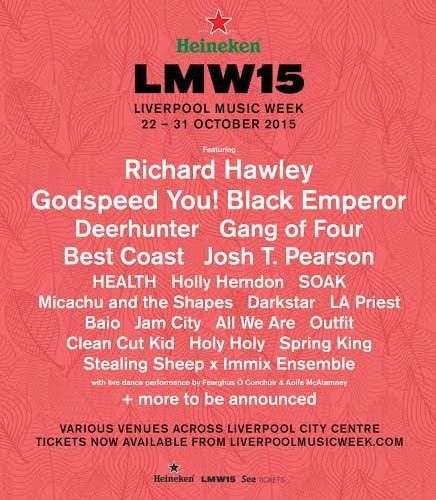 Liverpool Music Week is the UK’s biggest indoor music festival, with shows spread over nine days and some of the cities best music and arts venues, it is a truly independent jewel in the musical crown.

This years bountiful bill opens with Richard Hawley at The Dome and an Opening Party at the Kazimier featuring Micachu & The Shapes, Holly Herndon and Darkstar. Through the week their is a unique Stealing Sheep & The Immix Ensemble collaboration at the Bluecoat, Health and Best Coast headline the much loved Kazimier venue on 25th October and 30th October respectively, Godspeed You! Black Emperor play their first ever Liverpool show on 26th October at Camp & Furnace, and Josh T Pearson will be at the delightful Scandinavian Church on 28th October.

The festival partner with DIY Magazine for a series ‘Breaking Out’ shows at the Shipping Forecast and Arts Club, featuring some of the hottest new acts from around the world.

The festival will climax with another edition of the legendary Closing Party at Camp & Furnace on 31st October, featuring Deerhunter, Gang of Four, Soak, LA Preist.

All Tickets Onsale From – www.liverpoolmusicweek.com