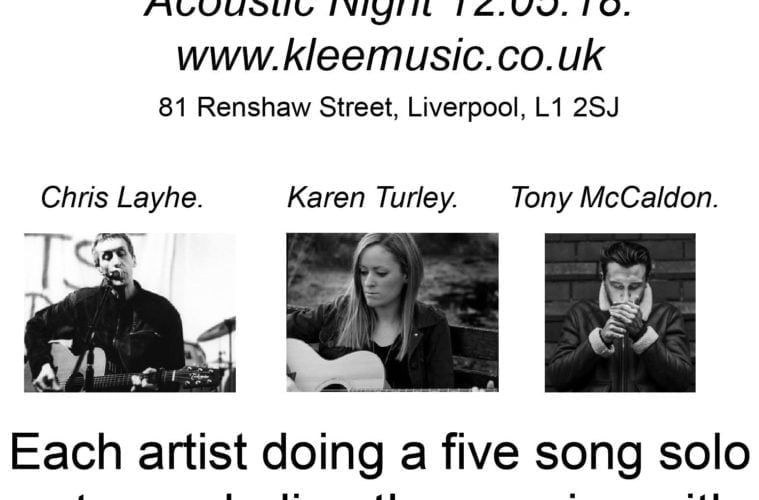 Klee Music Acoustic Night With A Difference Returns This Month

The premise is simple: an evening where three singer-songwriters each play a short set of their own material, and then come together at the end to sing a couple of songs as a trio. However, they will also perform a cover version of a song composed by the artist next to them! This intriguing concept worked well at the first Klee Music Acoustic Night, which featured Elijah James, Sophie Whittle and Esme Bridie.

For the second Acoustic Night, they have the combined talents of Chris Layhe, Karen Turley and Tony McCaldon. Karen Turley has a mixture of influences, ranging from the likes of Dixie Chicks, KT Tunstall and Alison Krauss. In 2015 she was chosen to travel to Nashville for a week of songwriting workshops, that culminated in a “in the round” performance at the Bluebird Cafe with Don Henry and Beth Nielsen Chapman. In May 2017 she was chosen to play at Elderflower Fields Festival on the American Association UK “Woodland Stage”. Chris Layhe, former bassist and tallest member of the massively successful alternative Liverpool rock band The Icicle Works, who enjoyed many chart success with both singles and albums. Now a solo performer and writer with a string of original songs including the bluesy, southern intoned Lord It Ain’t Easy through to the wistful Drop Of A Hat People.

Tony McCaldon makes up the evenings trio. A seasoned performer and a distinguished singer-songwriter in his own right, Tony has the rare talent of melding together emotional lyricism and musicality, resulting in a richness of composition that is not easily attainable.

Doors open at 7.00pm. First performer on stage at 8.00pm, the order of play to be decided at the sound check, probably by drawing straws! So we advise to get down to the gig as the doors open!

Tickets available £7.50 in advance from www.kleemusic.co.uk, or £10 on the door.