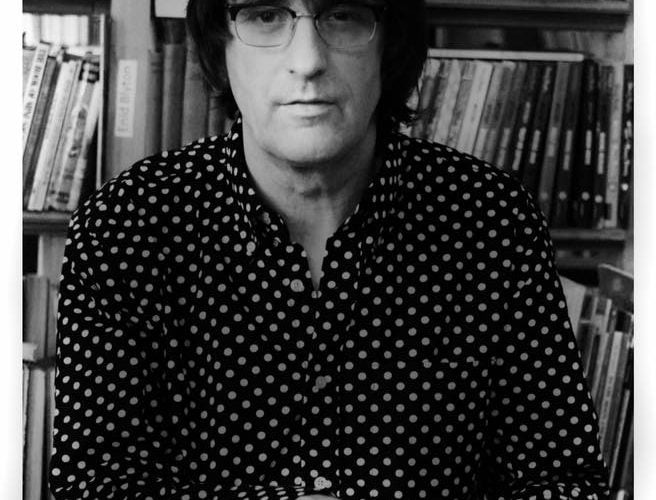 Liverpool Noise: You have reconvened 16 Tambourines to celebrate the up-coming 30th anniversary of the release of the “How Green Is Your Valley?” album. How did this come about?
Steve Roberts: We have spoken on and off about doing it for years now but hadn’t managed to get it sorted. Organising bands is difficult and as you get older it becomes more so. We have families, jobs, live in different parts of the country, all that kind of thing, but fortunately it came together this time. It’s the 30th anniversary of the album of course but that wasn’t the main reason behind it. We are friends who just wanted to meet up and play together again.

LN: Who will be playing live from the original line up who recorded the album?
SR: Me, Tony Elliot, Tony McGuigan, Dave Oliver and Susan Ellini. I’m playing guitar as I wanted to get back to the simplicity of how they’d been written. We were a brilliant live group and it’s good that we still have that energy and bite.

LN: With the obvious hindsight of 30 years, how does the album stand up to the passage of time? For example, where there aspects of the production that you didn’t like at the time, but now do, and vice versa? Did you have a choice of producer, or was it Arista’s call?
SR: Naively, I think we lost a bit of control of the album’s production and it annoyed me for a number of years but I’m surprised by how much I enjoyed listening to it recently. The others in the band will have their own opinions but I’d liked it to have had more straight forward arrangements and my voice feels a bit odd now, but overall it sounds pretty good actually! A band is a collaboration and when you add in producers and A&R and money, well it’s hard to stay on the horse, if I can mangle a metaphor. I enjoyed working with John and Phil who produced it. They were involved in us being signed so they got the production duties. I still like the songs a lot and a big disappointment is that if we’d have hung on, Radio One where looking to support us. Arista UK was a strange label, they were looking to the dance scene, which wasn’t where we were heading. Our management is a whole other story.

LN: What producers would be on your wish-list to record with?
SR: So many! John Leckie, Nick Lowe, Ethan Johns, Broudie. I could go on. I’d work differently with a producer now than I did 30 years ago. I’d stand my ground more, be more confident. I’m working with Craig Edmondson at the moment who’s really good with ideas and at playing, sound and arrangement. And I really like him, that’s a big consideration.

LN: Who are your favourite song-writers? And why?
SR: Again, so many! Do I have to mention The Beatles? Ha! The greatest for every reason you can think of. The Motown writers, perfect marriage of story, melody, groove. Weller, my first grown up song crush. Andy Partridge, Costello, Stevie Wonder, Burt and Hal. I love great melodies and interesting bits going on. Ray Davies is the master isn’t he? Vinny Peculiar is really good, he makes me smile as I shed a tear. Dylan, Young. You know the score. These are classic writers, there’s no why, it just is.

LN: Analogue or digital recording – any preference?
SR: If someone else operates the machine, analogue, but I think digital recording is okay, it’s what I do. I think you can get a good sound with both, and a bad one. I don’t consider myself to be a musician or recording engineer, and I’m not very good at those things, I get by. I’d rather work with people who ARE good at those things. I like to think I’m a songwriter really, so I have to get lucky when recording myself. I have a thousand bad examples of my recording technique.

LN: What’s the best studio you have recorded in?
SR: Parr Street. Particularly in its heyday, but I’ve not been in loads of so-called great ones. I like to feel comfortable and the tech or stone walls doesn’t matter too much to me. I like to feel at home and you can get that in a little humble room down any back street if you’re lucky.

LN: Throughout your life you have been active in politics at a local level. With current events, how do you see the involvement of musicians – or the arts in general – in respect to offering a commentary or criticism?
SR: I’ve written ‘political’ songs and I’ve enjoyed listening to many but I don’t think a songwriter or artist has to address those issues in their work. If you do it still has to be a good song or whatever. You have to be sincere about it. Love songs are more difficult to write I think, that’s a subject with magic properties, hard to define. I think we have the same responsibilities as any member of society to stand up for what’s right, we don’t know better than anybody else with a conscience. I don’t follow leaders and I despise those who run our world, but I also see the beauty that human beings are capable of. If I’m asked and I can, I play gigs in support of things I believe in, but I don’t have the answers and I don’t think any one way of thinking does. We are all children at heart. I’d love us as a species to evolve towards greater kindness, you know.

LN: The upcoming show at 81 Renshaw Street, what can we expect?
SR: I hope there’ll be smiles, fun, belting tunes, a great night out. We’ll play most of the album and a few others destined for a second that never happened.

LN: Peter Gabriel or Peter Hammill?
SR: Don’t know enough of either of their music, but I’ve met Gabriel and he was very nice, so I’ll say him.