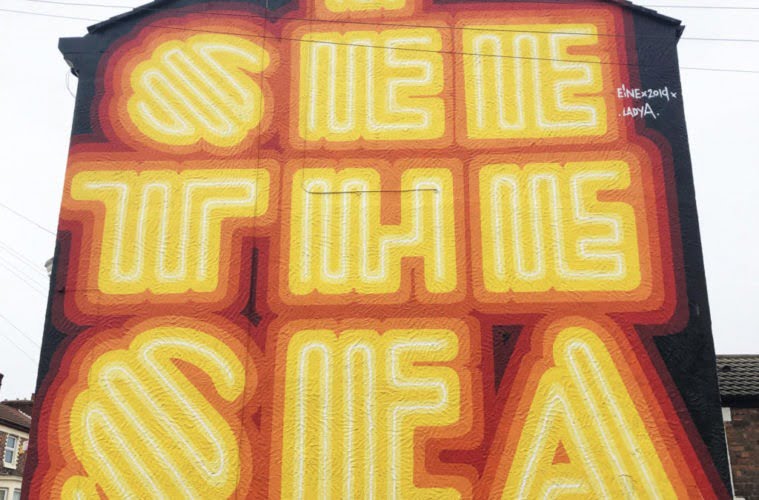 One of the most successful letterform artists, Ben Eine has just completed his latest work in the Victoria Quarter, New Brighton’s emerging independent district. Painted on the end gable of a privately-owned house, the piece which is entitled ’I SEE THE SEA’ is a bright and joyous work, and echoes the delight of a child first spotting the seaside.

The work has been commissioned by Wirral-based regeneration company Rockpoint Leisure as part of their ongoing privately-funded development of Victoria Quarter, which champions public realm improvements and has also seen them purchase a number of empty and derelict buildings, repurposing them with exciting hospitality and retail concepts.

’I SEE THE SEA’ joins more than a dozen original works by both local artists, plus also those with international repute, including Dotmasters and Mr Penfold; that now form an open-air street art gallery, which is driving visitors and tourists to the small, buzzy neighbourhood.

Speaking about the new artwork, Rockpoint Leisure Chief Executive Daniel Davies said: “We’re very pleased to have worked with Ben on this project and its an honour to welcome an artist of his calibre to Victoria Quarter, as we’re constantly looking to raise the bar with the artists we collaborate with. With such a distinctive style, it’s a truly standout piece which has been embraced by the community and should attract a great deal of interest.”

Artist Ben Eine added: “When I was first approached by Rockpoint, I was really interested to hear how they were using street art as part of a regeneration strategy, breathing new life into the town – I’ve thoroughly enjoyed my time in New Brighton, it’s got a great vibe and will definitely be back very soon.”

Originally a graffiti writer, Eine started his career more than 30 years ago, before developing his distinctive typographic style which has been seminal in the rise of street art’s popularity.

Eine’s partnership with the then emerging London graffiti artist Banksy was hugely influential to the commercial success of both artists, and in 2003 the pair set up the famous Pictures on Walls gallery.

He enjoys an on-going collaboration with Louis Vuitton, and in 2018 he unveiled the largest street art work in the world: the ‘CREATE’ mural – a 17500 square foot artwork painted on industrial ground in East London, which is visible from space.

Ben Eine’s “ I SEE THE SEA’ is located on Windsor Street, off Victoria Road in New Brighton’s Victoria Quarter.