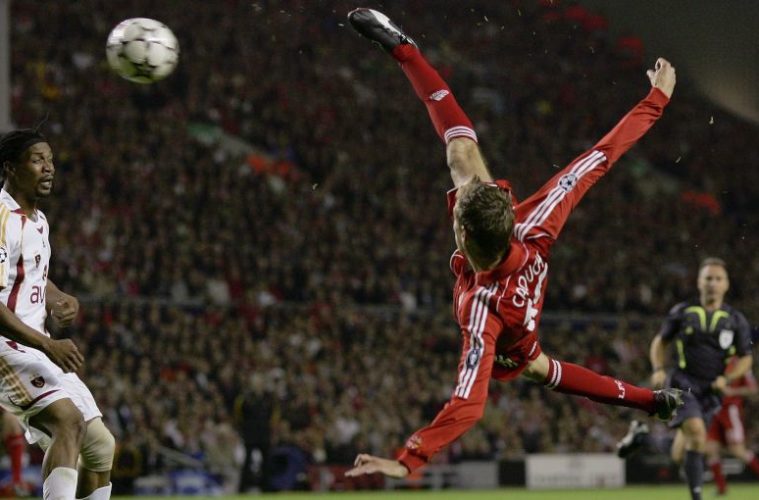 The top Liverpool’s tallest players of all time

As the current squad goes, Joel Matip is the biggest player standing at a just a shade under 6’5. It means he misses out on the list of Liverpool’s tallest players of all time but not by much.

Here we take a look at those who eclipse him into the top five.

Who are the tallest Liverpool players of all time?

The first name on our list of Liverpool’s tallest players of all time is former England keeper Chris Kirkland who measured an imposing 6’5 in between the sticks. Kirkland was tipped to be a generational talent of a keeper, but his career never really worked out that way with injuries playing more than a small part.

His Liverpool career only lasted 45 games meaning he cost the club a hefty £133k per appearance. Kirkland still went on to have a more than respectable career as a footballer with his most impressive period coming for Wigan; he spent six years there and, after playing, came back to Anfield to oversee the women’s team for a short period.

Here’s a name that will test the brain power of even the most devout Liverpool fan; do you remember Frode Kippe? Gerrard Houllier splashed £700k on his signature but the Norwegian giant spent just three years on Merseyside making a grand total of two appearances. It’s fair to say he was somewhat of a failure; given that, being on a list of the tallest Liverpool players of all time is probably the most positive list he can expect to make! To be fair to the fella, he did go on to have a decent career after Liverpool albeit confined largely to his homeland of Norway.

We have another goalkeeper to talk about but David James had a much more memorable spell at Anfield compared to the previously mentioned Kirkland. James also impressed from an early age with Liverpool making the move for the then Watford keeper after he was named Best Goalkeeper at the 1991 Toulon Tournament.

James, who was cruelly nicknamed ‘Calamity’ during his career, racked up near on 300 appearances for Liverpool from the time he signed through to the late nineties and helped the club to League Cup success. A further eight clubs followed with James’ highlight – along with an extended England career – being the 2008 FA Cup win with Portsmouth.

Sorry folks, we’ve got another keeper and the Liverpool of Steve Ogrizovic is closer to Kirkland than James. Well, actually, it’s probably more in line with the Liverpool career of Frode Kippe given he only made a handful of appearances during his stay with the Reds.

Ogrizovic was only 20 years old when Liverpool signed him from Chesterfield and was always going to find game time hard to come by with Ray Clemence the first choice. After five years on Merseyside Ogrizovic joined Shrewsbury before moving to Coventry in 1984; he’d go on to make over 600 appearances for the Sky Blues.

Let’s be honest, there is no drum roll needed to announce the fact that Peter Crouch tops the list of the tallest Liverpool players of all. The Premier League legend arrived at Anfield in 2005 following a £7m move from the South Coast where he played for Southampton.

Obviously, he’s nowhere near the conversation of Liverpool’s best strikers but he is somewhat of a cult hero for the Reds given he put up some impressive stats and starred in some memorable moments during his time with the club. At 6’7 (2,01m) he would probably fit in one NBA team if he had the talent (check out the complete list of the tallest players in NBA history here).

He averaged a goal every three games whilst wearing red: that’s not half bad. A host of Premier League clubs enjoyed him after Liverpool.

There you have it, the tallest Liverpool players of all time. Who was the one who took more advantage of his height?