Home
Places to Eat in Liverpool 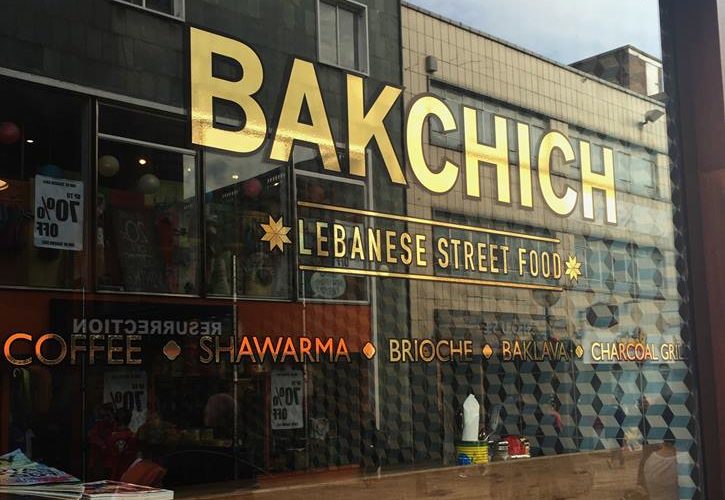 On a particularly wet and mundane Saturday evening, my boyfriend and I decided to venture up Bold Street to sample its latest culinary offering. A street that is both historic and ever changing, it’s become home to a quirky, cultural community of independent businesses – and Lebanese restaurant Bakchich fits right in.

On arrival we were greeted by the host who assured us of a table in ten minutes. As it was early Saturday tea time this was no surprise and as I peered around the restaurant door I saw a bustling mix of students, couples and weary shoppers. After a quick scan of the modestly priced menu we were shown to our table.

Self styled as ‘the best route to Beirut’ the menu was exciting and diverse. A newcomer to Lebanese street food I was given plenty of time to mull over the menu despite the fast paced feel. The menu was a love letter to Lebanon, a smorgasbord of Middle Eastern flavours. Initially tempted by the Mezze Platter, I finally opted for a starter of Hommos Shawarma (£4.95) and for my main, Shish Taouk (£8.95) from the grill. My boyfriend settled on Halloumi Machwi (£4.95) to start and then the speciality Kabsa B’laham (£8.95). We waited only a short time before an influx of food descended upon us. The starters and mains arrived all at once and the portions were mighty. Both being blessed with healthy appetites we saw the feast as a challenge but this would not be to everyone’s taste. Had we have been pre-warned by staff that the food is served when ready, we may have made our selection a little more carefully.

Never the less the food was delicious and satisfying; my starter of Hommos Shawarma consisted of marinated shredded chicken on a bed of fresh hummus served with authentic Arabic bread. The chicken was mouth-wateringly tender and the quantity made it excellent value for money. The grilled Halloumi cheese was served with a fresh medley of tomatoes, olives, fresh mint and olive oil. It proved to be a tasty accompaniment to the mains. The Shish Taouk was a triumph. Marinated and spiced cubes of chicken were served on a bed Arabic rice and salad, and there was also the option of Arabic bread. The mysterious speciality of Kabsa B’laham was described as ‘traditional kabsa with lamb’ and the juicy meat arrived nestled in fragrant spiced rice.

Not being a lover of lamb I forwent this dish but my boyfriend enjoyed the authentic feel and quality meat, although commented that after a while the dish became slightly humdrum and lacked a variety of flavours.

With full bellies we reluctantly declined dessert, but offerings included Baklawa (traditional Lebanese pastries), organic yoghurt with a choice toppings and a variety of ice creams and cakes. All priced at £3.50. An extensive and original breakfast menu is also served from 9am- 12pm daily. Bakchich is also an alcohol free premises but the drinks menu consists of an exciting array of fresh fruit juices, frozen yoghurt smoothies and fruit beers.

An excellent value meal that both filled and delighted us, Bakchich is sure to earn its place as another culinary jewel in Bold Street’s diverse crown.