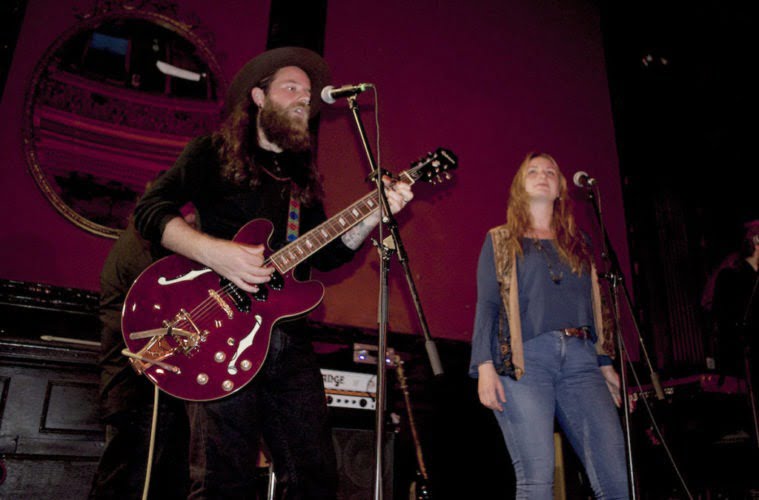 We caught up with the band before their Liverpool show at 81 Renshaw Street, and talked about life on the road, recording preferences, and the Liverpool music scene….

Liverpool Noise: It seems that you have a very busy couple of months coming up – with shows in the UK and Europe. How are you feeling about it?

Seafoam Green: To be honest, this isn’t even busy for us. We are what you call a “road band”, we like to get out and travel and meet the people as often as possible. So we are always planning ahead of where our music can take us. We love it. Playing in France/Belgium in July is always going to be a little extra fun too, with some (hopefully) great weather.

LN: Who are your favourite song-writers? And why?

SG: That’s a pretty damn long list. I go through phases of really getting into an artist and I’m always looking a new favourite songwriter. At the moment, (to name a few) Phil Cook & Oliver Wood are top of that list. They both have a such a great way of delivering what they wanna say. It all comes from the southern tradition of singing about life, finding the beauty in the everyday emotions and daily struggles. It’s something that I can really immerse myself in.

LN: We have noted that the production values are top-notch on Taponga Mansion – who  are your favourite producers, and how have they influenced you, if at all?

SG: Yes, making Topanga I was blessed with access to the best gear and amazing musicians as well as my mentor Rich who shaped the whole record. I’ve only worked with a couple of producers and tend to keep the circle small. The above mentioned Phill Cook did some cool stuff with a few bands including the Blind Boys of Alabama. More locally, my good friend Mario Leal is a great producer and has just finished working on the new John Grant record which I’m excited to hear.

LN: Highs and lows of Seafoam Green’s career so far?

SG: Luckily there hasn’t really been any lows, I just take it as it comes and try not to get ahead of myself. I guess when we were in the USA last year for 5 months and had initial visa rejection and a leg of the tour fell through which left us with little money for a period on the road but that’s all part of the adventure of being a rock n roll band on the road. The highs are exactly the same events viewed from another perspective… When the shows fell through we ended up through some random events staying in a huge log cabin on a lake in Montana in between Jeff Bridges ‘ and John Mayer’s house, which was a fun week.

SG: To be honest, no. My attitude is, if the band are cookin’ then it could be record on a whatever you want. For me, it’s about performance and delivery. After that, yes the better gear can makes the world of difference but I like to make sure what we are recording is right first.

LN: What’s the best studio you have recorded in?

SG: It’s got to be Parr St, in Liverpool. I’ve been getting my engineer head on this year and I’ve been really lucky that Chris Taylor at Parr St lets me shadow him to learn the ropes. So far this year, I’ve been in on some amazing projects.

LN: Can you give us any information about a follow up to Topanga Mansion?

SG: We are all lined up to make the follow up in October in Atlanta, Georgia. My good friend Tyler Greenwell from the Tedeschi Trucks band has invited us to make a record with him and some friends out there which is amazing. Tedeschi Trucks is the band that brought myself and Muireann together so it’s a bit special to be making our second record with members of that band.

LN: How do you view the current Merseyside music scene, and where do you see you fit into it – if at all?

SG: Liverpool is the best music scene in the UK, bar fucking NONE. There is so much great stuff going on, every genre covered and every scene available. I don’t know where I fit into it to be honest, I’m just happy to be able to dip in and out when we are not on the road.

LN: The upcoming show at 81 Renshaw Street, what can we expect?

SG: Music you can hang your soul on, let us carry your weight for an evening!