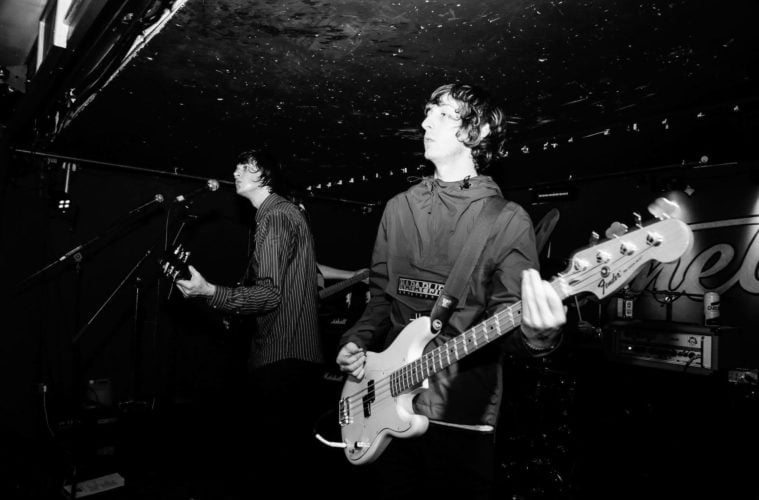 The Racket Live at The Magnet: Review

The audience for The Racket at The Magnet was the first really interesting point of the night. It was interesting to see how diverse it seemed to be, in demographic terms. Yes, there was your usual young gig-goer, the indie kid and the rocker, a cluster of hipsters, hanging onto a cultural identity that surely is on the wane.More mature ladies and gentlemen could be seen wearing T-Shirts emblazoned with their heroes logo, circling around the front of the stage, but leaving a respectful space that was left for the real hard core believers – The Racketeers. This is where the real audience interaction was to take place. The altar where the communion between band and fan would be consummated.

At the appointed time, the band take the stage, taking in the fervent atmosphere which tops up the pre-gig refreshments. They strike up the first song – the call to arms Get Out, which then morphs into the excellent Don’t Know What To Say. The sound at first isn’t the best, feedback, vocal levels all wrong. It’s a bit messy, but The Racket by sheer force of will plough on, and The Racketers go into collective overdrive, bouncing o each other, body slamming, beer ejaculating into the air, the floor becoming a sticky mess. People fall to the floor, but are helped up by their comrades – for its a community. The song You Know It For A Fact sums it all up.

The music is loud, edgy, and genuinely punky, which will make some of the audience misty eyed with nostalgia. But for those who want to kick back and listen, its melodic. There are tunes in there, and some great ones: Faded Days, Drag Me Down, and the truly majestic The White Ace. And The Racket really want to make you dance; well of sorts – just do your own thing, work o that energy that they give you. When punk was punk. Loud and tight in a loose fashion, they steam through a 16 song set. Callum the lead singer and guitarist swigging at his water bottle, all good looking intensity. Colby the bass player, street casual, swigs at the Carling while staring intently out, with a look of bemusement. Dom on drums, powers through the rhythm, never stopping the action. Guitarist Mike is clearly, very clearly, caught up in the moment. Tonight he is the conduit between band and audience, baptising The Racketeers with lager, singing along to the songs, threatening to jump the stage and cross the rubicon. Its genuine and fascinating.

This is a band who are the antidote to all that reality, Cowell – manufactured fodder that we are being presented with. No one eye on the commercial opportunities that maybe further down the road, the endorsements, product placement and all that guff. No cynicism – its real and its meant. And as gig builds upon gig, The Racketeers will grow in number, as sure as night follows day. Because its a community.