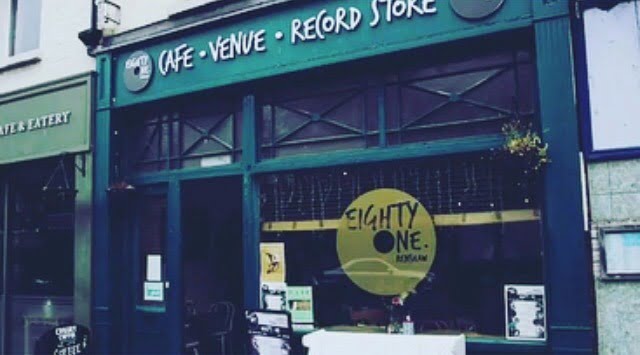 At the helm of probably the best small venue in Liverpool, we met Neil Tilly  (owner of 81 Renshaw) and discovered how, after a break from the local music scene, he returned to his promoting roots. We talked iconic bands, the rise of vinyl, and the current good health of the local music scene. Oh, and the time he had a personal audience with Macca and delivered an honest review of his new song…..

Liverpool Noise: How did you first get into promoting?
Neil Tilly: At 16 I left New Heys Comprehensive 6th form after 2 months and started working in a shipping office in town. It opened up a new world to me, a big open plan office of all ages. I became good friends with a colleague, Mark Nunnen who was two years older than me, he introduced me to the local music he was into; Echo & Bunnymen, Teardrop Explodes, OMD, Nightmares in Wax etc. It was the end of 1979 and musically it felt like something exciting was happening in the city.

when they were recording their single. I remember seeing a copy of Merseysound fanzine at SOS studios and thinking I could do that. So, I put together Breakout fanzine, luckily the Shipping office I worked at had a huge Xerox photo-copier to print ship manifest so I could print 200 copies without it being noticed. I was amazed when the first issue sold out. It was a natural progression to get into promotion.

The Breakout Gig in 1982 was the first gig I

put organised; it was at the Pyramid club. Probably the best club in town at the time. It was a sell out and a great atmosphere. I got the bug then and went on to put gigs on at clubs all over Liverpool. Brady’s, Lincolns Inn, Mr. Pickwick’s but it was The Left Bank, a small bistro on Mathew street that asked me to put on regular nights that soon became pretty much four nights a week. A year later I left my job, rented some offices on Dale street and was promoting full time.LN: When did you get the idea of owning a record shop and venue?
NT: It was February 2016, I was in the USA for a few months and was having a coffee at a record store and thought this is a great idea, a bar, coffee shop & Record Store. I decided I wanted to open something similar when I got back to Liverpool. 81 happened to come with a space at the back which once we insulated it, laid a floor, pained & installed the PA etc. became the venue you see now.


LN: How do you view the resurgence of vinyl?
NT: Vinyl never went away but it was difficult to get vinyl copies of new releases in the mid/late nineties. With vinyl, you either get it or you don’t, and that’s OK. I still stream music and I listen to CD’s in the car but with vinyl It’s about owning something, a physical thing, the artwork, the vinyl experience is so much more complete.

LN: The interview with Macca – now legendary. How did that come about?NT: Ha, to be honest, it all seems a bit bizarre now. I think Paul is genuinely a top bloke. He saw Breakout and decided, that’s the magazine I’ll give my first interview to for 2.5 years. It was all very surreal, but I did not think about it that much at the time. I guess I didn’t appreciate the gravity of it. I had an interview arranged with Bill Nelson a few weeks later and could not wait, I was in awe to be honest, Bill had been a hero of mine for many years whereas I had never owned a Beatles record. But thinking back, when I was sat at Air Studios and Paul McCartney walked in with George Martin and said “Hi you must be Neil, shall we find somewhere quiet we can chat” I had to pinch myself. I spent 60 minutes with him alone chatting.

LN: Is it true that he played you a new song?
NT: Yeah, I told him it was shite. Next question!

LN: 81 the building has an impressive musical pedigree, hasn’t it?
NT: Many musicians spent time at 81 in the early 60’s. John, in particular, because he was such a good friend of Bill Harry. John wrote for Merseybeat and it was at 81 where he wrote about how the name ‘The Beatles’ came to him on a ‘Flaming Pie’. Bill Harry said that the only time he saw John cry was when the magazine moved from the top floor to the middle floor and they lost a lot of Johns artwork. Yes, I have looked in the loft but not under the floorboards yet. I’ll get around to it.


LN: Views on the current local music scene?
NT: It’s healthy, some great bands/artists around. I was spoilt though by being 16 in 1979 and getting into the business then when Liverpool had so many fantastic bands. The big difference now is that there are so many solo artists, singer songwriters.


LN: Best ever gig you have put on?
NT: Hmmm. Probably the most notorious was Kink Kurt at The Venue Club on Seel Street when half the band ended up in hospital. It made the front page of the Echo. Basically, one of the bouncers decided he didn’t like the band and used a baseball bat to show his displeasure. The night was crazy, King Kurt were at the top of their game. It was very messy, I had it in the contract that they covered the stage with dust sheets. The band encouraged their fans to throw flour, paint, you name it at them. It was crazy but great.


LN: The worst?
NT: My worst financially was Australian 9 piece ‘Hunters & Collectors’, I thought they were great, I loved the single ‘Talking to a stranger’.  Again, this was at the Venue, 3 people turned up but to their credit the band played as though it was sold out. I had to pay them £200.


LN: Any tips for budding promoters?
NT: Attention to detail. Knowing your audience. A love for what you do. Treating people like you would like to be treated. Oh, and booking acts that people will want to go and see – that’s a good one!!

LN: Favourite bands?
NT: Sorry Beatles would not be in the top 10. I’d say, Half Man Half Biscuit.

LN: Joy Division or Magazine?
NT: That’s not fair. I like Joy Division more now than I ever did but I’d have to say Magazine. ‘Real Life’ is just such a good debut album. Definitive Gaze is the best opening album track ever, it’s got such good strong songs. Magazine have such a good body of work.