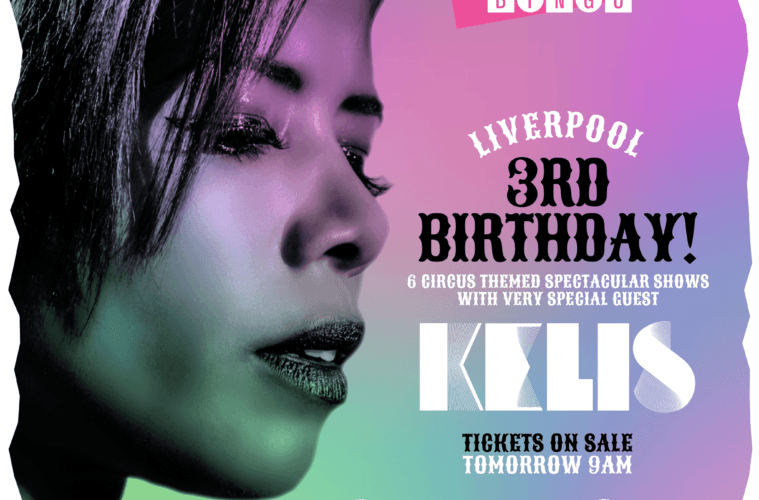 Liverpool’s Bramley Moore Dock hosts a string of sensational dates in May with a unique circus theme: 25th, 26th, 27th and 31 st May and 1st and 2nd June.

What started with just two people and a bingo machine in Liverpool back in spring 2015 is now rapidly approaching its 3 rd birthday celebrations in the city. The internationally recognised event takes place right across the UK, as well as hosting a series of sold out shows in Australia, Dubai, Amsterdam, Paris and Ibiza with more launches around the world planned through the year.

And they are now incredibly proud to announce a quite simply sensational special guest who will be joining them live for 6 massive shows: Kelis. Years of chart dominating songs and thrilling, boundary pushing music has resulted in millions of albums sold and numerous top 10 hits. She has released six albums, won Brit, Q, and NME Awards, and been nominated for two Grammy Awards. Kelis has toured every corner of the world, performed at every major festival, and shared the stage with the world’s top artists, and alongside her music she is also a Le Cordon Bleu trained chef. Kelis crowns what is all set to be Bongo’s Bingo’s biggest run of events to date
at the circus-themed extravaganza at the Bramley Moore Dock, on 25, 26, 27 and 31st May and 1st and 2nd June.

Bongo’s Bingo has reinvented what it means to go out, uniting wild crowds across the UK and around the world for nights of magic and mayhem, rejuvenating the quintessential quaint British pastime with elements of an experiential live show, rave, nostalgia-soaked revelry and a night of pure escapism.

The Bongo’s Bingo phenomenon is a catalyst for a shift in the night life scene across the country, with people eschewing the usual clubs, festivals and bars for an altogether different experience of bingo wildly reinvented into a whole new way of having fun, which has captured and inspired the imaginations of many during the last three years. And of course, there’s also the chance to win a pink unicorn amongst many other iconic prizes, including Henry Hoovers, boxes of Coco Pops, mobility scooters, life-size cardboard cut-outs and lots of cold hard cash.

Bongo’s Bingo continues as an insane mix of a live show, a rave and heads-down game of bingo, with dance-offs, rave intervals, plenty of heckling, audience participation, countless hands-in-the-air anthems each night. It is a unique recipe which creates truly wild scenes each night, a true UK success story which continues to grow.

It’s a night out like no other, and the 3rd birthday celebrations in Liverpool are all set to be something incredibly special with… Kelis!

Tickets are on sale now from www.bongosbingo.co.uk