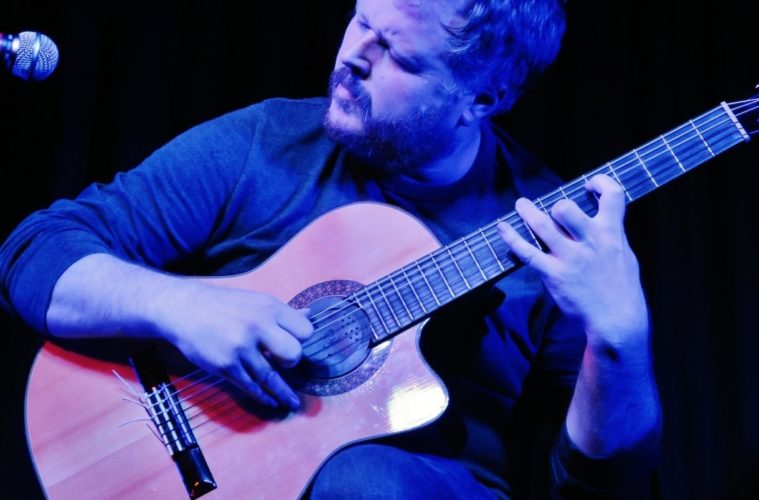 Steve Kinrade had a brilliant, in-depth chat with Neil Campbell about his inspirations, his unqiue production techniques and much more.

Liverpool Noise: Congratulations on your latest release! What was the inspiration that led you to The Great Escape?

The way I work is that I have sets of compositions that are about 60% complete before I go in to record them. At that stage they are often mainly elaborate chord progressions with a certain feel to them.

Groups of these pieces then present themselves as fitting together because they have a similar approach or sound. So, I end up knowing that a certain set of say 12 pieces will be this album and this other 8 tracks will become another mini-album or follow another concept. I’m usually working on about 3-4 album/EP projects like this at any one time.

I became very interested in the idea of what I call ‘atomised guitar’ which is a production technique I invented where you take an arpeggiated set of guitar chords, which ordinarily you would just sit in front of a mic and record, but instead of doing it that way you split the chords up into separately recorded  individual notes which lock or hocket together, meaning each individual string of the guitar can be placed in its own position in the stereo field. This creates textures which are like little mosaics in the mix.

I used a lot of techniques like this to expand the sonics in the arrangements, even sampling whole guitars or sets of guitar harmonics and electronically sequencing them, using cyclical structures in percussion or guitar patterns a la Steve Reich, or using different double-tracking arrangements where different guitars play identical parts but hard panned left-right for instance. These techniques form the backbone of the musical arrangements.

During 2020, throughout the COVID disruptions, I found the time to get in and work on these pieces. We couldn’t easily invite lots of guests in to play so it became by necessity a multitracked project with me playing most of the parts, sometimes building up arrangements into 60 or more tracks of overdubbed audio.

All the pieces for this album seemed to have that kind of chilled out airy, travelogue kind of approach. I couldn’t help but reflect that, even though everyone is detained in their houses, locked on an island unable to travel, through listening to music one can be liberated to the freedom of one’s own unbounded thoughts and reflections with music as the catalyst for that experience – hence the title The Great Escape.

LN: What is your creative process? Do you start with home demos, and then move to a studio?

NC: I stockpile ideas and either write them down on manuscript and/or record them on my phone. For instance, many of the ideas for this album originate from perhaps 6-7 years ago. Some if them may have been tried out over the years with other musicians in the rehearsal room, or played live in less developed forms.

I create some of the more complex sequenced electronic parts of the production at home using Sibelius software to generate midi files which are brought into the studio and voiced etc.

The studio sessions are usually day sessions separated by a few weeks at a time so, rather than go into the studio for say 2 weeks to record and finish an album, the way I work allows me to live with and think about the work in progress between sessions. In this case the whole thing was completed in something like 8 days over 9 months.

LN: You worked closely with Jon Lawton at CrossTown Studios. How important was Jon in the creative process?

NC: Jon is like the mid-wife in the process of giving birth to the production. He makes sure everything I want to do technically is achievable as quickly as possible (meaning we make fast progress), he’s a great second opinion at every stage of the way and knows how to record things well. He’s also very personable so he creates a great atmosphere to get the work done in a way that is just great fun – and that is really so important. And he is very musical!

LN: What other musicians did you collaborate with on the album?

NC: As I said, most of the playing was multitracked by me. Viktor Nordberg came in for a session to record drums on around half of the album. He’s a very versatile and tasteful musician who always comes up with very musical and creative solutions to the parts. Violinist Amy Chalmers, who came in for a session mainly to do with another project (the next album after this one) recorded some low register violin on one of the tracks (Land Locked) which I think is very effective and of course played beautifully.

LN: Was there a track on the album that you were initially worried about, but turned out to be what you expected? If so, what was this process?

NC: All the finished tracks surprised me (in a good way!) when I compare them to the initial ideas. I think when tracks took time to be finished it was when aspects of, sometimes quite complex, mixes needed tweaks. But the good thing about working in the studio is that every problem has a solution – that’s what is so fun about the recording process.

LN: Your launch show is on the 10 December at Prohibition Studios. What can we expect?

NC: The concert will begin with an opening set by vocalist/composer Una Quinn, whose album Inside Out (2019) I collaborated on.

Following this, a trio of two guitars and bass (After the Flood Trio) will play a 45 min set of original music that includes brand new pared-down arrangements of around half of the music from the new album.

LN: Although the release date for the album is the 17 December, can those people who go to the show purchase the album there?

NC: I have almost completed the next album, Faldum, which has been conceived for vinyl. It is a much darker album, quite classical in tone with violin and cello textures and is a concept album based on a short story by Herman Hesse. That’s the next thing I think.

Tickets for Neil Campbell at Prohibition Studios on Friday 10 December are available from www.prohibitionrecordingstudios.co.uk/events/neil-campbell

The Great Escape is available now on pre-order via Klee Music.